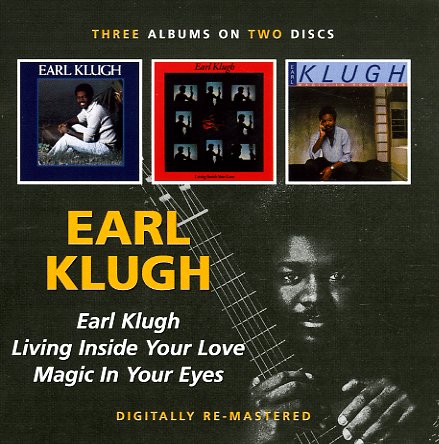 A trio of Earl Klugh albums from the mid-to-late 70s – Earl Klugh, Living Inside Your Love and Magic In Your Eyes – in a 2CD set! Earl Klugh is the guitarists debut – a player whose sound went onto dominate late 70s fusion in a big big way! Klugh's clearly stepping here into a space allowed by George Benson at the time – a blend of jazz and R&B that's warmer and mellower than work previously done on Blue Note in the decade (or on CTI and Kudu for that matter) – one that's less focused on rhythm than it is on tone, and the kind of setting that allows Earl to shine wonderfully. There's a lot less of the cheesiness here that would hurt Klugh's later albums, and the overall presentation is nicely retrained – arranged by Dave Grusin at a time when he still knew how to bring a good deal of soul into a session, avoiding cliche and letting the soloist step forth unmarred. Other players include Lee Ritenour, Harvey Mason, and Grusin himself – and Klugh plays both electric and acoustic guitar, on tunes that include "Angelina", "Slippin In The Back Door", "Vonetta", "Waltz For Debby", and "Wind & The Sea". Living Inside Your Love is his second album for Blue Note – and like the first, a nicely stripped-down album that we like a lot better than his later work! Klugh's sound and tone are still very pure here – set up in some nice small group arrangements by Dave Grusin, and recorded in a way that brings out all the sweetness in Earl's approach, without falling into the cheesy qualities that it inspired in so many other, weaker players. If anything, Klugh's style is stronger and more confident than on his first outing – on titles that include "Kiko", "The April Fools", "Captain Caribe", "Felicia", and "Living Inside Your Love". Magic In Your Eyes is another sweet early effort from Klugh, with the title track plus "Alicia", "Julie", "Rose Hips", "Cry A Little While", "Cast Your Fate To The Wind" and more.  © 1996-2023, Dusty Groove, Inc.