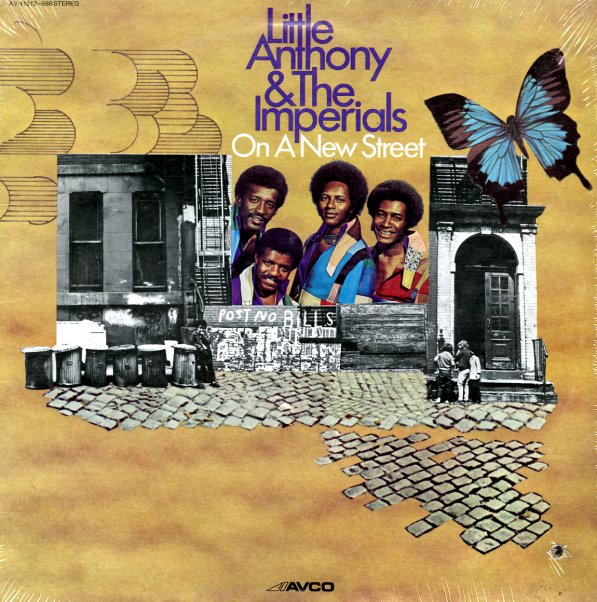 On A New Street

Wonderful work from Little Anthony – and a great update to his smooth 60s harmony sound with The Imperials! Anthony wisely employs the use of two of 70s top harmony arrangers on the album – using Thom Bell on one side, and Teddy Randazzo on the other – both of whom really help take the group to a whole new level! The Thom Bell material fits perfectly with his work with The Stylistics from the same time, and the cuts have a wonderfully mellow east coast harmony style that's quite different than Anthony's earlier work. Teddy Randazzo does a pretty nice job, too – but with a fuller sound too, almost in a Manhattans mode that makes for a nice change from the previous fragility of Anthony's vocals. Titles include "I Don't Have Time To Worry", "That's What Love is All About", "I'm Falling In Love with You", "Heartache Never Entered My Mind", and "The Loneliest House on the Block".  © 1996-2021, Dusty Groove, Inc.
(Cover has a cutout hole and light wear.)

Best Of The Stylistics
Avco, 1975. Very Good+
LP...$14.99
Some of the greatest falsetto harmony ever recorded – and a smoking batch of the group's biggest hits! 10 tracks in all, with titles that include "Stone In Love With You", "People Make The World Go Round", "Break Up To Make Up", "Betcha By Golly, Wow", ... LP, Vinyl record album

Showdown
T Neck, 1978. Very Good+ Gatefold
LP...$11.99
The Isley Brothers in prime 70s mode here – hitting a warm and wonderful blend of soul and funk throughout – always delivered with that sweet talent for smooth understatement that makes them so great! The costumes on the front cover may be freaky, but the grooves are nicely restrained ... LP, Vinyl record album

Richard Evans
Horizon, 1978. Very Good+
LP...$9.99
One of the few albums as a leader by Chicago Soul genius Richard Evans – a key late 70s effort that perfectly sums up all his genius on record for countless other artists! The album's got a warm, smooth groove that's totally great – one that builds tremendously from the sophisticated ... LP, Vinyl record album

Message From The Magic
Atco, 1978. Very Good+
LP...$3.99
A really great step for the mighty Blue Magic – a group who are always great, no matter what the setting – and who make the move away from Philly disco to some warmer mellow sounds from the west! The album's done with production from Skip Scarborough, who really brings a new sort of ... LP, Vinyl record album

Feel The Warm
Enterprise, 1971. Very Good+
LP...$3.99
Billy goes for a hip 70s easy mode – a bit like Grady Tate, and made even better by sweet LA arrangements from Artie Butler. The titles have kind of a sophisticated soul groove to them, and Billy's definitely stretching his voice a bit to keep up with Artie's arrangements. Titles include ... LP, Vinyl record album

Sketches Of Spain
Columbia, 1960. Very Good+
LP...$24.99 (LP...$22.99)
A beautiful collaboration between Miles Davis and the great Gil Evans – and perhaps the most perfectly realized of all their projects! The album's got a wonderfully unified feel – as it begins with long compositions that have a distinct Spanish-tinge (and not a Latin-tinge, which is an ... LP, Vinyl record album