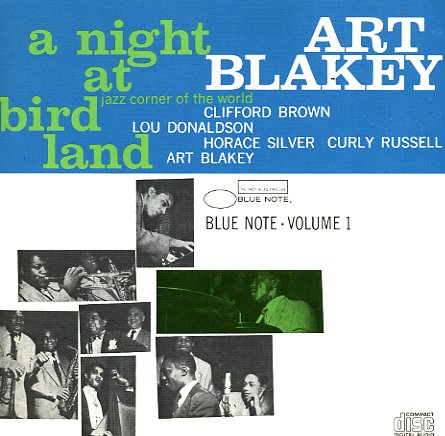 A wonderfully hard-storming set – and a record that not only firmly put the Jazz Messengers on the map, but also set a whole new standard for live jazz recording! The group here is the early version of the Messengers – almost co-led by drummer Art Blakey with pianist Horace Silver – and featuring Clifford Brown on trumpet, just a few months before his early death – plus Lou Donaldson on alto and Curley Russell on bass. The presence of alto instead of tenor makes the sound slightly different than later incarnations of the group – and the overall approach is one that virtually defines the shift from straight bop to hardbop in the 50s – a mode that both Blakey and Silver were key in creating. Tracks include "Split Kick", "Quicksilver", "Mayreh", and "A Night In Tunisia". CD features 2 bonus tracks, and great remastering!  © 1996-2021, Dusty Groove, Inc.
(Out of print.)

Complete Town Hall Concert
Blue Note, 1962. Used
CD...$7.99
A legendary work – featuring Charles Mingus' great and chaotic Town Hall concert, one of those special events that achieved legendary status before it even started – not just because of the range of great musicians involved, but because the whole set was barely off the ground by the ... CD

Original Jam Master Vol 3 – Mellow Madness
Blue Note, Late 60s/Early 70s. Used
CD...$14.99
Some of the funkiest work on guitar ever recorded – and a great overview of the legendary sessions that Grant Green recorded for Blue Note in the late 60s and early 70s! Years back, the label used to disown these sessions – claiming they were more commercial and lower-quality than ... CD

Genius Of Modern Music Vol 1 (Non-RVG remastered edition)
Blue Note, Early 50s. Used
CD...$3.99
A great collection of Monk's 10" recordings for Blue Note – seminal not only for the label's commitment to a modernist bop ideal, but also for Monk's integration in the growing collection of top-level jazz players on the New York scene. The work's notable also for the fact that Monk's ... CD