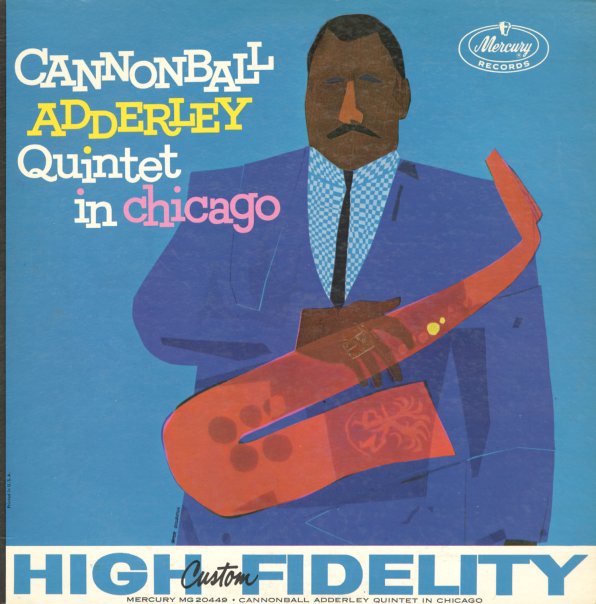 A great session from 1959 – one that features John Coltrane playing with the Adderley group, recorded in Chicago when they were stopping through the city with Miles Davis' combo at the time! In fact, since the rhythm section includes Wynton Kelly, Paul Chambers, and Jimmy Cobb – and since Coltrane's sitting in with Cannon – the album's essentially a Kind Of Blue-era Miles album, recorded without Miles on trumpet, and grooving in a slightly more soul-based Adderley mode. Given the presence of Coltrane, there's a bit less of the gutbuckety soul jazz that Cannon was cutting in his own Quintet – but that's more than ok with us, as the Coltrane solos more than make up for that difference! The set's got 2 great originals by Coltrane – "The Sleeper" and "Grand Central" – plus the cuts "Wabash" and "Limehouse Blues".  © 1996-2021, Dusty Groove, Inc.
(Black label stereo pressing with deep groove. Vinyl has just a few light marks. Cover is in nice shape, with some very small stained spots on back.)

Drums Night
Mercury (Japan), 1977. Near Mint-
LP...$38.99
A really unusual performance for this Japanese-only album – one in which Philly Joe Jones is joined by two other drummers, Al Foster and Billy Hart – in a lineup that also includes Atlee Chapman on trombone, Charles Bowen on tenor and soprano, Brian Smith on bass, and Walter Davis Jr on ... LP, Vinyl record album