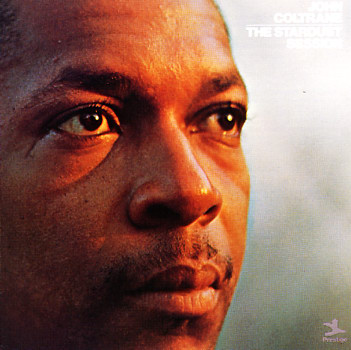 An excellent double-length album that brings together a full session of material by John Coltrane – titles that were initially scattered over a number of different albums, but finally brought back together for this package! The album features Coltrane blowing in a quintet with trumpeter Wilbur Harden – making the set a nice counterpart to the Harden/Coltrane work at Savoy – but done here in a style that's more fully spacious, in keeping with Trane's Prestige work as a leader. Rhythm is by the trio of Red Garland on piano, Paul Chambers on bass, and Jimmy Cobb on drums – and tracks were originally issued on the albums Stardust, Standard Coltrane, and Bahia. 8 titles in all – including "I'll Get By", "Don't Take Your Love From Me", "Stardust", "Invitation", "Love Thy Neighbor", and "My Ideal".  © 1996-2022, Dusty Groove, Inc.
(Out of print.)

Live In 1962
Unique, 1962. Used
CD...$3.99 5.99
A live performance by the classic quartet – with Coltrane on tenor and soprano sax, McCoy Tyner on piano, Jimmy Garrison on bass, and Elvin Jones on drums. Tracks include "The Inch Worm", "Everytime We Say Goodbye", and "Impressions". CD

My Favorite Things
Atlantic, 1961. Used
CD...$0.99 (CD...$24.99)
Wonderful wonderful wonderful work from the legendary John Coltrane – and even though it's probably one of his best-selling albums of all time, it's still a treasure – and has an essential place in just about any jazz collection! We've heard the original title version of "My ... CD