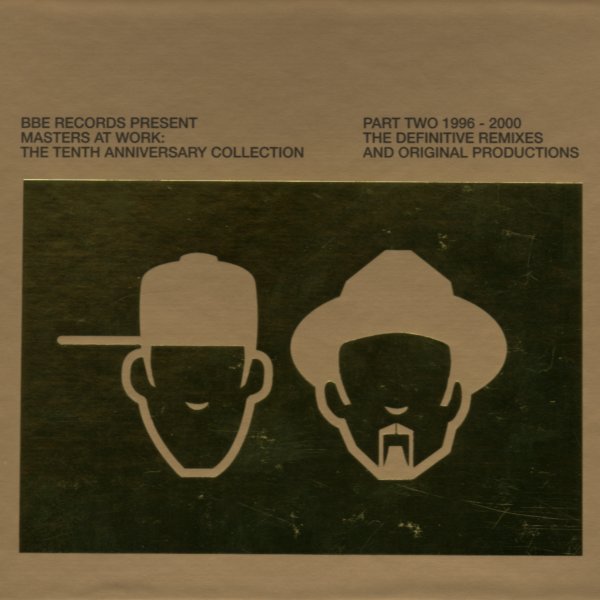 Part two of this stunning collection of the work of the duo known as Masters At Work! This 4CD collection showcases MAW's amazing ability to blend a wide range of influences from house, classic disco, hip hop, and Latin into a dancefloor friendly mix that not only sounds fresh and up-to-date, but which also has a very strong respect for grooves of the past. MAW have worked with so many different artists over the past 5 years, that this collection ends up being as much a rich document of the growth of club and soul music in general, as it is a testament to their own stunning work. Like the first volume in this series, every track is a killer – and like the first, this is a overstuffed package that's got a huge amount of tracks! Titles include "To Be In Love" by India, "Divine Love" by Ultra Note, "Days Like This" by Kenny Lattimore, "The Ghetto/El Barrio" by George Benson, "MAW Expensive" by Masters At Work, "Watching Windows" by Roni Size/Reprazent, Atmosfear's "Dancing In Outer Space", "Bangin" by Kenlou 6, Monday Michiru's "Sunshine After the Rain", "Around the World" from Daft Punk, "Desire" by Nu Colors, "Are You Using Me" by Luther Vandross, "What'cha Gonna Do" by Eternal, "Spirit" by Cunnie Williams, "Recue Me" by Sunkids, Incognito's "Always There", "I Want You Back" by Mel B, and 4 tracks from Nuyorican Soul: "Mind Fluid", "You Can Do It Baby", "It's Alright, I Feel It", and "Runaway"!  © 1996-2023, Dusty Groove, Inc.

Rich Medina Presents Jump N Funk
BBE (UK), Mid 70s/Late 2000s/Early 2010s. Used 2 CDs
CD...$6.99 8.99
One of the coolest projects we've heard from Rich Medina in years – a killer compilation that brings together older Afro Funk tracks from the 70s with a big amount of cuts from more contemporary years – all with a blend that pushes the spirit of the continent way out into the cosmos! ... CD