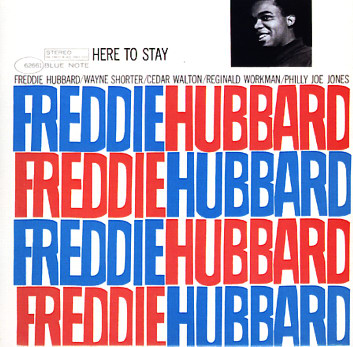 A great session that was recorded by Freddie Hubbard in the 60s, but not issued by Blue Note until the mid 70s – and only then as part of a short-lived double length set! This version is the first real issue of the material – with the original cover art intended for the session in the 60s – and as such, it's presented in a way that helps it stand strongly with Freddie's best early albums for Blue Note! The sound here is sharp-edged and soulful – a reflection of the groove that Freddie was hitting in the Jazz Messengers of the early 60s, played by a group that features three members of that ensemble – Wayne Shorter on tenor, Cedar Walton on piano, and Reggie Workman on bass – along with Philly Joe Jones on drums! Tracks are hard, straight, and soulful – not bogged down in some of Hubbard's misdirected modernism – and titles include "Philly Mignon", "Father & Son", "Nostrand & Fulton", and "Assunta".  © 1996-2021, Dusty Groove, Inc.
(Out of print.)

High Blues Pressure
Atlantic/Koch, 1968. Used
CD...$11.99
A real gem from Freddie Hubbard's 60s years – an all soul jazz outing, cut with a hip array of players that show that young Fred was definitely on the forefront of jazz at the time! Despite the "blues" in the title, the main groove is spiritual soul jazz – in a style that ... CD

Straight Life (remastered edition)
CTI, 1970. Used Gatefold
CD...$9.99
An amazing second CTI set from Freddie Hubbard – one that takes off nicely from Red Clay territory, and starts to hit an even funkier mode! The tracks here are all relatively long, with a huge amount of solo space for Freddie on trumpet, Joe Henderson on tenor, George Benson on guitar, and ... CD

Open Sesame (with bonus tracks)
Blue Note, 1960. Used
CD...$6.99
Seminal work from Freddie Hubbard – an early hardbop session that features some great work by Tina Brooks on tenor, piano by McCoy Tyner, and rhythm from the team of Sam Jones on bass Clifford Jarvis on drums! And although Freddie's great at this early point in his career – playing ... CD

Flight To Jordan (RVG remaster edition – with bonus tracks)
Blue Note, 1960. Used
CD...$8.99
Quite possibly the greatest album ever cut by pianist Duke Jordan – a seminal force in bop, both for his writing and playing – but an artist who rarely ever got the chance to work as a leader! This session's a prime bit of lost Blue Note – with an unusual and edgey lineup that ... CD