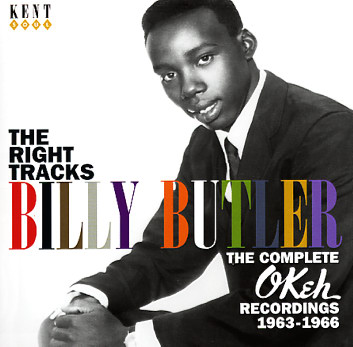 The complete Okeh label recordings of Billy Butler – Jerry Butler's lesser-known brother, but an even more grooving artist on the Chicago soul scene of the 60s! Billy's work at Okeh is easily some of the best of the all-great imprint – tracks that step, slide, and groove along in a flurry of tight-edged Chi-soul rhythms – nearly all of which are produced by the legendary Carl Davis, with arrangements from Johnny Pate and Riley Hampton! Billy's in the lead on vocals, but nearly all numbers have a strong harmony soul component too – support from The Four Enchanters or Chanters – in a mode that echoes The Impressions' style of the time somewhat, but which also carries more of the Butler-family emotive quality, thanks to the stronger lead. This is the first time all this material has ever been brought together so well – and the package features great notes and a number of previously unissued titles as well – including some rare versions and instrumentals that are sure to get some play from Northern Soul listeners. Titles include "Found True Love", "Lady Love", "Gotta Get Away", "Can't Live Without Her", "Right Track", "Boston Monkey", "Does It Matter", "Fighting A Losing Battle", "To Be Or Not To Be", "Singing The Blues", and "You're Gonna Be Sorry".  © 1996-2020, Dusty Groove, Inc.

Everybody Loves A Good Time – Best Of Major Lance
Okeh/Epic, 1960s. Used 2 CDs
CD...$9.99
Major Lance was one of Chicago's first big soul stars – crossing over big on the charts with huge hits for the Okeh label during the early and mid 60s. That work is very fairly represented here on this 40 track set – with great notes, and a rich selection of songs that even includes a ... CD