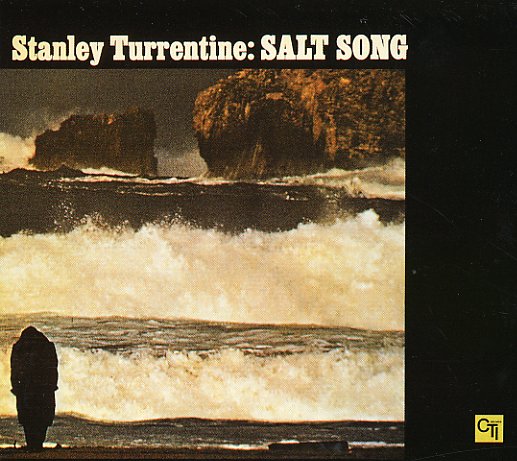 An amazing album from Stanley Turrentine – quite different than most of his other sessions for CTI, but in a really great way! Stan's playing here with arrangements from Deodato – in a swirling, Brazilian jazz influenced mode that's similar to their work together with Astrud Gilberto on her CTI album – save for the fact that this set's all instrumental, with Turrentine's tenor in the frontline! The sound is wonderful – soaring, swirling, and plenty darn soulful when Stan's tenor comes into play – and in a way, the album's almost an instrumental companion to the Gilberto CTI album. Instrumentation includes some great keyboards from Deodato and Richard Tee – plus guitar from Eric Gale – and tracks include "Gibraltar", "Salt Song", "I Haven't Got Anything Better To Do", and "Storm". CD features the bonus track "Vera Cruz".  © 1996-2022, Dusty Groove, Inc.
(Digipack case has some edgewear and a mark on the back .)

Spoiler (non-RVG pressing)
Blue Note, 1966. Used
CD...$8.99
Stanley Turrentine's no spoiler here – as his tenor sax soars out over the top of some sweet larger group arrangements from Duke Pearson – all awash in a great sense of soul, joy, and life! The album's got a much brighter feel than you might guess from the cover – a vibe that's a ... CD

Comin' Your Way
Blue Note, 1961. Used
CD...$19.99 (LP...$39.99)
One of our favorite-ever albums from the great Stanley Turrentine – a really hard-burning session from his earliest days as a leader – and one of the key dates he cut with his brother Tommy Turrentine on trumpet! Both players are wonderful – a sharply soulful team coming off of ... CD

Dearly Beloved (Japanese pressing)
Blue Note (Japan), 1961. Used
CD...$19.99
One of Stanley Turrentine's most obscure sessions for Blue Note – a rare trio side featuring Roy Brooks on drums, and wife Shirley Scott on organ – billed on the original album cover as "Little Miss Cott"! The feel here is a bit more open than usual – no bassist on the ... CD

Prelude
CTI, 1972. Used
CD...$6.99 (CD...$8.99)
A legendary album from the 70s funk scene – and one of the crowning achievements of keyboard maestro Eumir Deodato! Deodato got his start during the bossa years of the 60s – where his sophisticated charts were already enough to make his career a landmark – but in the following ... CD

Prelude
CTI, 1972. Used
CD...$8.99 (CD...$6.99)
A legendary album from the 70s funk scene – and one of the crowning achievements of keyboard maestro Eumir Deodato! Deodato got his start during the bossa years of the 60s – where his sophisticated charts were already enough to make his career a landmark – but in the following ... CD

Walking In Space
CTI/A&M, 1969. Used
CD...$8.99
One of the greatest Quincy Jones albums of all time! The record's a spacey jazz masterpiece – and it combine's Quincy's soulful soundtrack vision with the excellent production talents of Creed Taylor, for a monster album of long drawn out cuts that mix soul jazz with more sophisticated ... CD