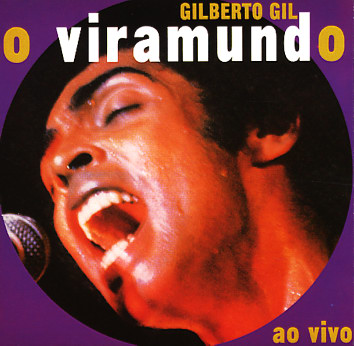 Wonderful live work by Gilberto Gil – recorded on his triumphant return to Brazil in the early 70s! The groove is very very stripped down – and most tracks feature Gil out front on guitar, with backing by only keyboards and percussion. If you know Gil's work, though, you know that he can make a setting like this filled with fire and emotion – and his sharp edgey guitar playing alone is worth the price of the record. His vocals are the stuff that really puts the album over the top, though – as the range of his emotion and soulful power are tremendous, and show the singer in a light that you rarely hear on some of his more restrained studio albums. There's also a great deal of interaction with the audience, recorded in a manner that really brings out the personality of Gil in this sort of setting. Lots of tracks – 19 in all – with titles that include "Gaivota", "Viramundo", "Baby Hippy", "Musico Simples", "Expresso 2222", "Back In Bahia", "Brand New Dream", "Procissao", "Objeto Sim, Objecto Nao", "Ela E Eu", and "Cada Macaco No Seu Galho", done in a duet with Caetano Veloso!  © 1996-2022, Dusty Groove, Inc.
(Out of print.)

Nightingale
Warner/Collectables, 1978. Used
CD...$8.99
A very nice album cut by Gilberto Gil in the US in the late 70s – one that features production by Sergio Mendes, and sound that's a strong mix of jazz, soul, and Brazilian grooves! The record kind of fits in with the Elektra modern soul work at the time – a smooth blend of jazz and ... CD

Quanta Gente Veio Ver
Warner (Brazil), 1998. Used 2CD
CD...$9.99
A double-live album recorded on the heels of Gil's excellent Quanta studio album – done with that magically free and open sound that he hits in front of a crowd. The band on the set is pretty tight and professional, but never too slick – and Gil runs through a good mix of older and ... CD

Gilberto's Samba
Sony (Brazil), 2014. Used
CD...$14.99
One of the best records we've heard from Gilberto Gil in many, many years – a stripped-down session that focuses on his voice and guitar work – in a style that takes us back to Gil's earliest days in music! The album feels like some lost session that Gilberto might have recorded in the ... CD

Gilberto Gil Ao Vivo
Polygram (Brazil), 1974. Used
CD...$16.99
An excellent live set from 1974! Gilberto is playing in a fairly stripped down form, and the recording focuses mostly on his soulful singing and choppy acoustic guitar – although there is a larger group on a few tracks that plays electric guitar and keyboards, but never in a way that ... CD

Realce
WEA, 1979. Used
CD...$6.99
A nice album from the late 70's that manages to capture a lot of the warmth and imagination of Gil's earlier work. The production's a little smooth in parts, but Gil's beautiful voice and guitar playing are still right out front, especially in some of the more stripped-down tracks. Titles include ... CD

E-Collection – Sucessos & Raridades
Warner (Brazil), Late 70s/Early 80s. Used 2CD
CD...$4.99
A pretty cool collection of work by Gilberto Gil – featuring one disc of hits, and another of rarities! The hits – or "sucessos" – are from his years at Warner and Som Livre, when Gil was working in a mode that was slicker and funkier than his 70s stuff for Philips, but ... CD

Caetano E Chico - Juntos E Ao Vivo
Polygram (Brazil), 1972. Used
CD...$4.99
A classic live set from two of the great C's of Brazilian music – Caetano Veloso and Chico Buarque, both recorded at a very influential time in their music! The image of both artists sitting alongside each other on the cover really captures the spirit of the set – as there's an ... CD