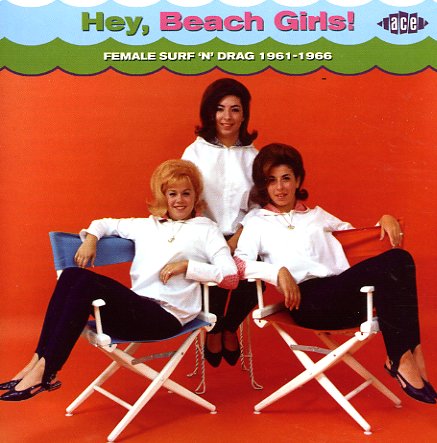 Hard grooving surf pop from the early-to-mid 60s – and this one's from the ladies – sun soaked, pulpy surf and drag strip rockers featuring The Honeys, Donna Loren, The Surfettes, Andrea Carroll, The Westwoods, Ellie Gee & The Jets, Dee Dee Sharp, Little Pattie & The Statesmen and many more! The solo and girl group vocals are a great mix of sweetness and rebelliousness, and the same could be said for the songs – which also masterfully mix knowing kitsch and genuine rockers. Players, producers and arrangers include Gary Usher, Lee Hazlewood, Hal Blaine and David Axelrod – and in Ace Records tradition, it comes with a thick booklet of great notes & photos. Titles include "Pray For Surf" & "Shoot The Curl" by The Honeys, "Cycle Set" by Donna Loren, "Surfer's Playmate" by The Fleetwoods, "Drag Race Johnny" by Little Pattie & The Statesmen, "Your Baby's Gone Surfin'" by Duane Eddy & The Rebellettes, "Don't Drag No More" by Susan Lynne, "Surfer Boy" by The Supremes, "Rod Hot Rod" by The King Pins", "Red Corvette" by Ellie Gee & The Jets and many more. 25 in all!  © 1996-2021, Dusty Groove, Inc.