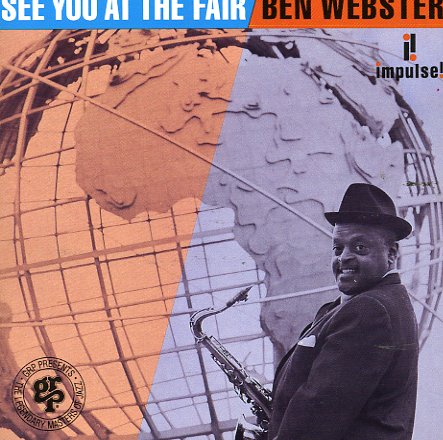 A great little album from Ben Webster – perhaps not his most sophisticated, jazz-wise, but done up in a cool cover that has him standing in front of the steel globe at the 1964 World's Fair in New York. The music on the disc has a similar optimistic approach – as Ben solos lightly over rhythms by either Hank Jones or Roger Kellaway on piano (and a bit of harpsichord), plus bass and drums backing by Richard Davis and Osie Johnson. The album's got a great rolling soul jazz number called "See You At The Fair", and a very odd crashing harpsichord number called "Lullaby Of Jazzland" – plus the tunes "Fall Of Love", "While We're Dancing", and "Our Love Is Here To Stay".  © 1996-2021, Dusty Groove, Inc.
(Out of print.)

In A Mellow Tone – Recorded Live At Ronnie Scott's Club
Ronnie Scotts (UK), 1964. Used
CD...$9.99
Features Ben Webster on tenor sax, Alan Branscombe on piano, Lennie Bush on bass, and Jackie Dougan on drums. Tracks include "In A Mellow Tone", "Gone With The Wind", "Perdido", "Ben's Theme Tune", and "Over The Rainbow" – plus a short ... CD

Soulville
Verve, Mid 50s. Used
CD...$4.99
About as classic as you can get for Ben Webster on Verve Records – a nicely mature, nicely laidback session that really captures the energy promised in the title! The sidemen are all in an easygoing, soulful mode – Oscar Peterson on piano, Herb Ellis on guitar, Ray Brown on bass, and ... CD