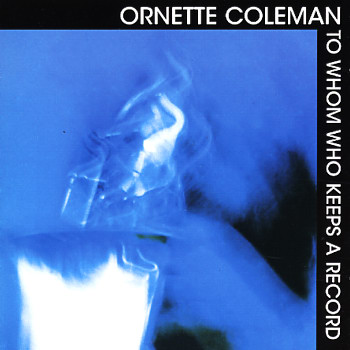 To Whom Who Keeps A Record

Essential Ornette Coleman – and some great rare material pulled from his early days at Atlantic Records! The sides were recorded in 1959 and 1960 – but never issued until this format, a rare mid 70s album that was only issued in Japan! Despite that obscurity, though, the material is tremendous – on a par with Coleman's more familiar Atlantic albums – and every bit as essential as the revived lost sides on the albums Twins and Art Of The Improvisers! Ornette's working here with his classic quartet that included Don Cherry on trumpet, Charlie Haden on bass, and either Ed Blackwell or Billy Higgins on drums – and the album features 7 tracks, titled as a statement – "Music Always", "Brings Goodness", "To Us", "All", "PS Unless One Has", "Some Other", "Motive for Its Use". Brilliant – and very true in this case!  © 1996-2020, Dusty Groove, Inc.
(Japanese pressing, including the insert. Cover has some edge wear and bumped corners.)