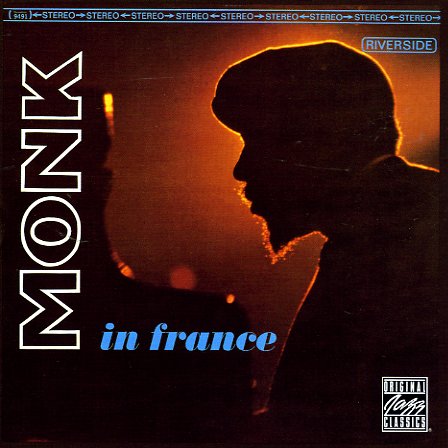 Live material recorded in France during the early 60s – when Thelonious Monk was working with his super genius stripped-down quartet that featured Charlie Rouse on tenor, John Ore on bass, and Frank Dunlop on drums! The tracks are a simple but elegant expression of Monk's ideals – laid out in longer versions than usual, with some great work by Rouse and Monk on the solos – already a near-perfect pairing here, ready to turn out some amazing 60s work for Columbia in years to come. Tracks include "Off Minor", "I Mean You", "Hackensack", and "Well You Needn't". CD includes bonus tracks "Body & Soul" and "Crepuscule With Nellie".  © 1996-2021, Dusty Groove, Inc.
(Out of print.)

Monk.
Columbia (France), 1964. Used
CD...$5.99
Beautiful Columbia work from Thelonious Monk – a record that has as much warmth and charm as it does visionary modernist moments! A number of the tunes are standards, not Monk compositions – and they're done here with a sense of depth and joy of exploration that's really wonderful ... CD

Seven Standards & A Blues
Riverside/OJC, 1957. Used
CD...$18.99
Ernie Henry was a fantastic alto player who only cut a rare few albums before his untimely death. Most folks will know him from his great work on a few Monk sessions – but this album features tracks that were the last the Henry cut as a leader, done in late 1957 shortly before he passed away. ... CD