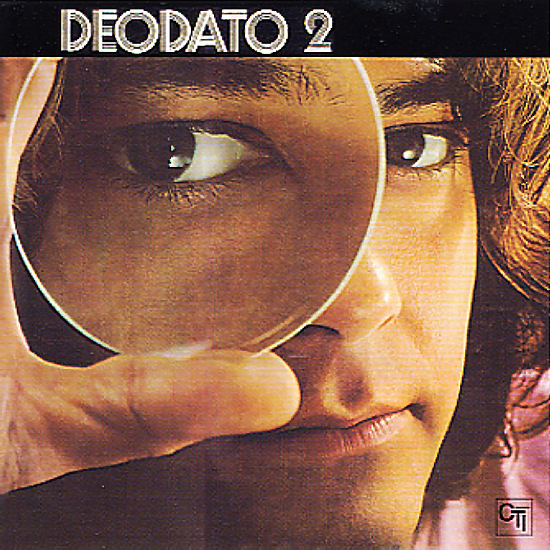 Funky keyboards galore – and one of the greatest records ever from this legendary Brazilian jazz talent! The album follows nicely off Deodato's Prelude classic for CTI – and like that one, this set's built on long-flowing tunes that rise and fall with a wonderful sense of rhythm – a sublime electric piano groove that's quite different than anything Deodato recorded before – and possibly never realized this perfectly again after his CTI years. Other players include Stanley Clarke on bass, Billy Cobham on drums, and Hubert Laws on flute – and titles include the massive Latin funk track "Super Strut", plus the tunes "Pavane For A Dead Princess", "Skyscrapers", and a great version of "Nights In White Satin".  © 1996-2023, Dusty Groove, Inc.
(Cover has light wear, a small cutout notch and a name in pen on the front, back and labels.)

Knights Of Fantasy
Warner, 1979. Sealed Gatefold
LP...$14.99
Smooth jazzy work from Deodato – a record that takes off from his electric keyboard work of the early 70s, and shows his growing interest in modern soul and R&B a the time! Deodato's still a few years way from some of his famous soul production work, but he's already got a great ear for ... LP, Vinyl record album

Prelude
CTI, 1973. Very Good Gatefold
LP...$8.99
A legendary album from the 70s funk scene – and one of the crowning achievements of keyboard maestro Eumir Deodato! Deodato got his start during the bossa years of the 60s – where his sophisticated charts were already enough to make his career a landmark – but in the following ... LP, Vinyl record album

Canned Funk
CTI, 1975. Very Good Gatefold
LP...$19.99
Nothing canned here – as the sound, style, and groove of the record is as fresh and freaky as the classic image on the cover! The riffing rhythms get going right from the start – some amazing lines from a rhythm combo that includes Joe Beck on guitar, Herb Bushler on bass, Jim Madison ... LP, Vinyl record album

Black Widow
CTI, 1976. Near Mint-
LP...$11.99
Funky 70s work from film score maestro Lalo Schifrin – served up with a bit of a disco twist, and plenty of the electric jazz funk elements that were showing up in his soundtracks at the time! Lalo's on keyboards, playing a cool host of electric ones that give the record a nice spacey sound ... LP, Vinyl record album

Glory Of Love
CTI, 1967. Near Mint- Gatefold
LP...$7.99
Herbie Mann's soulful flute meets the breezy production values of CTI/A&M, for a good set of tracks that have a light easy feel to them, and a nice post-bossa groove! The set includes a good cover of "Upa, Neguinho", plus "Love Is Stronger Far Than We", "The ... LP, Vinyl record album

Concierto
CTI, 1975. Very Good+ Gatefold
LP...$29.99
One of Jim Hall's most compelling albums from the 70s – a mix of lightly swinging tunes and more complicated numbers, recorded with some of his best partners from earlier years! Chet Baker is on trumpet, Paul Desmond is on alto sax – and the rest of the group includes Ron Carter bass, ... LP, Vinyl record album

One On One (Half-Speed Mastered)
CTI, 1979. Near Mint- Gatefold
LP...$14.99
A mellow mainstream fusion classic from the 70s – one that paired the gentle guitar of Earl Klugh with the sweet keyboards of Bob James – in a set that's filled with plenty of warm and laidback touches! The mode here takes off some of the darker edges from James' earlier sound, and ... LP, Vinyl record album

Carnegie Hall
CTI, 1973. Near Mint- Gatefold
LP...$28.99
Maybe some of the coolest music ever recorded at Carnegie Hall – a wonderful venue that's perfect for the blend of soul and space of the CTI Records years of Hubert Laws! Laws' lead lines on flute really stretch out beautifully in the setting – given ample room to roam amidst a lineup ... LP, Vinyl record album

Bad Benson
CTI, 1974. Very Good+ Gatefold
LP...$14.99
Pretty mellow stuff from George Benson, but with some nice moments! Don Sebesky handled the arrangements for this set of larger backings – but Benson's guitar is right out front, hitting some super-dope lines at the best moments, stretching out from the warm Fender Rhodes or horn heavy ... LP, Vinyl record album