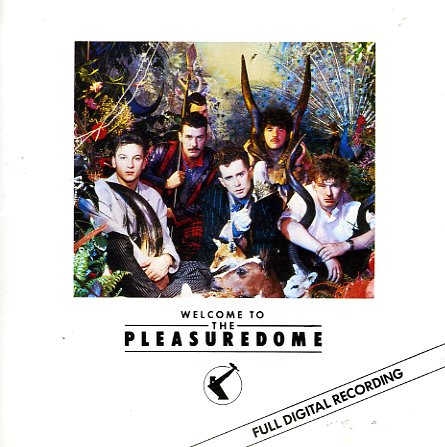 Arguably one of the greatest concept albums of the 80s – and the only really strong full length album cut by Frankie Goes To Hollywood! At the time of the set, the group was riding high on the success and controversy of their singles "Relax" and "Two Tribes" – but in the ambitious ZTT mode, sought to expand their sound way past familiar hits, and into a realm of sonic exploration that rivaled that of labelmates Art Of Noise. Don't get us wrong, because the Frankie of this album is still very much in groove-oriented territory – but they also let Horn take over with some more striking tunes that are both longer and shorter than the usual pop track – offsetting the vocal numbers on the record with a rich tapestry of musical backdrops that also more firmly forward the group's social and sexual leanings. The album features surprising covers of "War", "Do You Know The Way To San Jose", and "Born To Run" – plus the hits "Relax" and "Two Tribes", and the original numbers "Welcome To the Pleasure Dome", "Krisco Kisses", "The Ballad Of 32", "Wish The Lads Were Here", "Black Night White Light", "The Only Star In Heaven", "The Power Of Love", and "Bang".  © 1996-2021, Dusty Groove, Inc.
(Out of print.)

Real Thing
32 Jazz, 1977. Used
CD...$16.99
A soaring, soulful session – and one of the best albums ever from drummer Louis Hayes! Hayes still has some of the style he forged with Horace Silver in the 60s – but he's also working here with some very spiritual younger players, who really help open up the sound of the record – ... CD

Brothers 4 (Brothers 4/Donny Brook)
Prestige, 1969/1970. Used
CD...$24.99
Two organ/sax cookers back to back – both featuring Don Patterson and Sonny Stitt! First up is the wonderful album Brothers 4 – a mighty pairing of organist Patterson and saxman Stitt – one of Don's grooviest late 60s outings, thanks to an excellent sound from all players ... CD