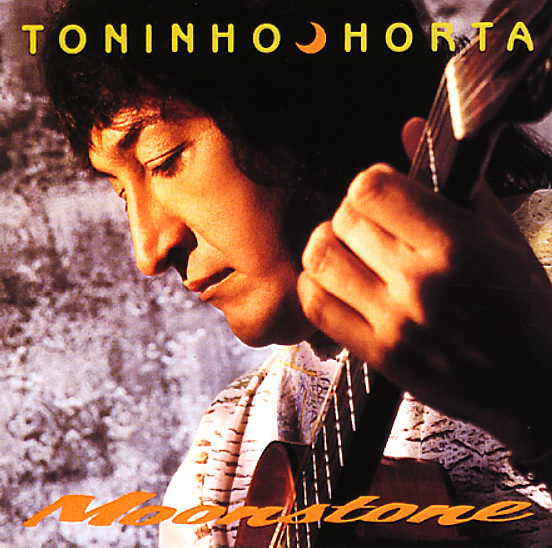 Also available
Toninho Horta — Moonstone ... CD 4.99
A lovely blend of fusion and Brazilian roots – and one of Toninho Horta's standout sets from his US years at Verve! The album's got a warm, organic feel that's quite different from other American fusion of the time – still filled with some of the influences that drove that music in the US, but carried off in a way that's much deeper and more personal overall – thanks to Toninho's always-great approach! Horta sings wordlessly and plays guitars – and the instrumentation shifts a bit from track to track, creating different moods with the addition of players who include Pat Metheny on guitar, Onaje Allen Gumbs on synth, Billy Drewes on soprano sax, and Nana Vasconcelos on percussion. Titles include "Spirit Land", "Francisca", "Sun Song", "Bicycle Ride", "Eternal Youth", and "Gershwin".  © 1996-2023, Dusty Groove, Inc.
(Original late 80s pressing.)

Moonstone
Verve/Universal (Japan), 1989. Used
CD...$4.99
A lovely blend of fusion and Brazilian roots – and one of Toninho Horta's standout sets from his US years at Verve! The album's got a warm, organic feel that's quite different from other American fusion of the time – still filled with some of the influences that drove that music in the ... CD

Certain Smile, Certain Sadness
Verve (Japan), 1966. Used
CD...$12.99 (CD...$6.99)
Kind of a dream combination in one little album – especially if you dig breezy bossa from the 60s! Back in 1966, Verve Records got the great idea of teaming up its (then) biggest Brazilian imports – vocalist Astrud Gilberto and organist Walter Wanderley – both of whom were ... CD

September 17, 1969
Verve/Rev-Ola (UK), 1969. Used
CD...$8.99
One of the grooviest records ever from the lovely Astrud Gilberto – a session that beautifully mixes her usual bossa nova with bits of Sunshine Pop and other hip late 60s grooves – all in a mode that really takes off a lot more than other Gilberto albums on Verve! The style here is ... CD

I Haven't Got Anything Better To Do (Japanese pressing)
Verve (Japan), 1970. Used
CD...$9.99
One of the darkest albums ever recorded by Astrud Gilberto – her 60s last session for Verve Records, and a batch of beautifully moody tunes throughout! Arrangements are by Albert Gorgoni, who'd handled Gilberto's previous September 69 album – but the style here is a bit mellower, a bit ... CD