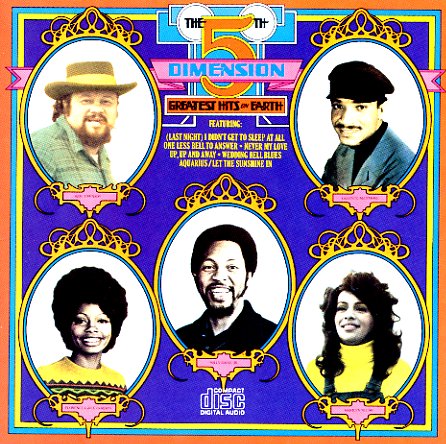 All the genius you'd ever want by this sublime soul harmony group – packed up on one CD! Lots of great songs by Jimmy Webb and Laura Nyro – and titles include "One Less Bell To Answer", "Save The Country", "Wedding Bell Blues", "Last Night I Didn't Get To Sleep At All", "Stoned Soul Picnic", and "Up Up & Away".  © 1996-2020, Dusty Groove, Inc.
(BMG Direct pressing, inner pages of the booklet have some pencil.)

Very Best Of The 5th Dimension
BMG (UK), Late 60s. Used
CD...$4.99
Soul doesn't get any groovier than this! This legendary LA vocal group had a masterful talent for mixing soul harmonies and pop production – and they forever transformed the face of AM radio with their ability to put over a song with incredible sweetness while still coming up with enough ... CD