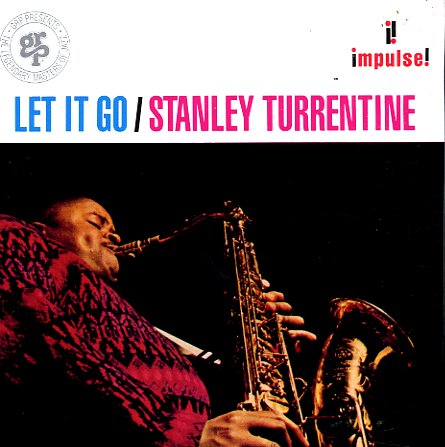 A rare non-Blue Note 60s date as a leader from Stanley Turrentine – recorded for Impluse when his (then) wife Shirley Scott was contracted to the label – and featuring the talents of both players on some very groovy tracks! The quartet features both Stan's tenor and Shirley's Hammond – with bass by Ron Carter and drums from Mack Simpkins – all in an easy-going groove that recalls some of the best Turrentine/Scott pairings on Prestige! There's a quality here that's relaxed, but never lazy – professional, but never slick – and the album's great proof that although both players could be great on their own, they often sounded even better together at this point in their careers. The album features a cool version of "On a Clear Day", which Shirley always manages to kick into a nice groove – plus the tracks "Good Lookin Out", "Let It Go", "Sure As You're Born", "T'Aint What You Do", and "Ciao Ciao".  © 1996-2021, Dusty Groove, Inc.
(Out of print.)

Sugar/Gilberto With Turrentine/Salt Song (with bonus tracks)
BGO (UK), 1971. Used 2 CDs
CD...$9.99
3 classic albums Stanley Turrentine! Sugar was a big hit for Stanley and a pretty darn nice record of extended groovers, with a harder sound than you might expect! The original record's only got three cuts – all done in a mode that sounds a lot more like harder Prestige sessions from the ... CD

That's Where It's At (RVG remaster edition)
Blue Note, 1962. Used
CD...$14.99
Where it's at with Stanley Turrentine – circa 1962 – a time when the tenorist was really hitting on all burners, and turning out some tremendous work for Blue Note! The album's got Stan working with a special guest – a rare Blue Note appearance from pianist Les McCann, who's also ... CD