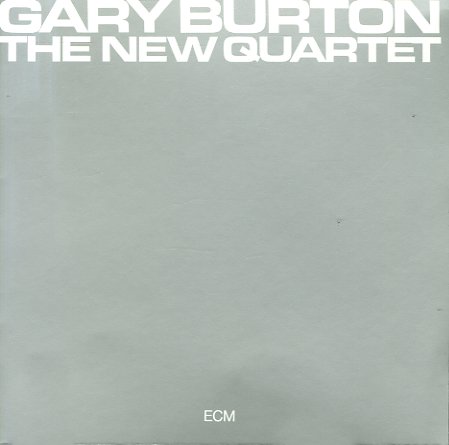 A fantastic 70s album from Gary Burton – a set that definitely has the "new" promised in the title, as it takes off more from some of Gary's work in previous years! The record's got this explosive sense of color that really comes through in Gary's vibes – and in the way the group can leaop into the fray when needed – almost funky at points, but also able to shift into more sensitive modes too – balanced between the guitar of Michael Goodrick,bass of Abraham Laboriel, and drums of Harry Blazer. Burton's got a bit more bite at times than before – pushing even past his Atlantic Records sound and the tunes are a well-chosen array of songs by contemporaries who include Keith Jarrett, Mike Gibbs, Chick Corea, and Carla Bley. Titles include "Open Your Eyes You Can Fly", "Coral", "Tying Up Loose Ends", "Olhos De Gato", and "Mallet Man".  © 1996-2022, Dusty Groove, Inc.
(Original US pressing. Cover has light surface wear.)

Live In Tokyo
Atlantic (Japan), 1971. Near Mint- Gatefold
LP...$59.99
A wonderful live set from Gary Burton – originally issued only in Japan, but a wonderful record that stands strongly with Gary's classic early 70s work for Atlantic and ECM Records! The group's a quartet – and has Gary's vibes alongside warm guitar lines from Sam Brown – a player ... LP, Vinyl record album

Genuine Tong Funeral
RCA, 1968. Very Good+
LP...$19.99
One of the most ambitious projects ever from vibist Gary Burton – an extended piece written by Carla Bley – and billed as "A Dark Opera Without Words"! The work has a feel that's much more fluid than opera, though – and is a great instrumental outing that not only ... LP, Vinyl record album

Offramp
ECM, 1982. Near Mint-
LP...$11.99 (CD...$5.99)
A really wonderful little record from Pat Metheny – quite possibly our favorite by the man, thanks to some really inventive sounds that still resonate strongly in the groove scene today! Pat's skirting nicely here between the sound-based quality of earlier records, and some of the more fluid ... LP, Vinyl record album

First Circle
ECM, 1984. Near Mint-
LP...$13.99
Arguably the last great album to come from the classic Pat Metheny collaboration with Lyle Mays – a record that's tightened up considerably from some of the group's earlier efforts, but which gives as its reward some wonderfully compelling tunes! Pat's still very much influenced here by a ... LP, Vinyl record album

Travels
ECM, 1982. Near Mint- 2LP Gatefold
LP...$14.99
A live album, but every bit as seminal as the studio sides that Pat Metheny cut for ECM at the time – and proof that the Metheny magic was clearly his own, and not just a product of studio tricks by Manfred Eicher! The set reprises tunes and themes from a variety of Metheny's earlier ECM ... LP, Vinyl record album

Rejoicing
ECM, 1984. Near Mint-
LP...$16.99
A sweet trio session with Charlie Haden on bass and Bill Higgins on drums. Titles include "The Calling", "Tears Inside", "Lonely Woman", and "Rejoicing". LP, Vinyl record album

Watercolors
ECM, 1977. Near Mint-
LP...$9.99
A seminal record in the formation of the Pat Metheny sound of the 70s – a set that brings his wonderfully chromatic work on guitar into play with the piano of Lyle Mays – all at a level that's so stripped-down and spacious, you can easily hear all the genius as it unfolds! And yet the ... LP, Vinyl record album