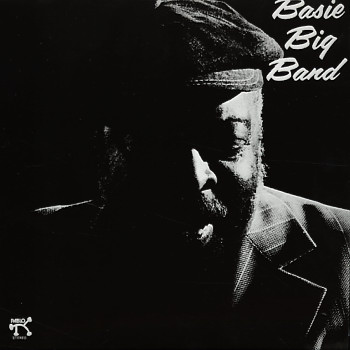 The Basie band is plenty big here – but never too much so to lose their confident swing of earlier years! The Count is still firmly at the helm at the time of this recording – leading and playing keys with that spacious, stepping quality that makes a Basie number of the later years groove so nicely. But there's also some wonderfully complex patterns on the horns – new shadings and colorings that come through on the album's batch of all original tracks by Sam Nestico, whose presence in the group in the 70s really helped shape its sound. Sam's work here is every bit as valuable as Neal Hefti's in the 50s – and tunes like "Front Burner", "Freckle Face", "Orange Sherbert", "Soft As Velvet", and "Midnight Freight" push the group far past the cliches they might have fallen into during these later years!  © 1996-2021, Dusty Groove, Inc.
(Cover has some edge wear.)

Pop Goes The Basie
Reprise, 1964. Very Good+
LP...$4.99
Count Basie goes pop, and the results are mighty nice – a hard-swinging take on familiar tunes from the 60s, but all re-tooled the jazzy Basie way! The vibe here is right up there with the best Neal Hefti moments with the group – and although the arrangements are by Billy Byers, they've ... LP, Vinyl record album

Chairman of The Board
Roulette, 1958. Very Good-
LP...$4.99 (CD...$8.99)
Way before Sinatra first grabbed the "Chairman Of The Board" title for his own musical persona, Basie laid great claim to the tag with this tight little album for Roulette! The album's got the 50s Basie band working at the height of their powers – with original compositions written ... LP, Vinyl record album

Lil Ol Groovemaker Basie!
Verve, 1963. Very Good+
LP...$9.99
Count Basie and Quincy Jones were always a mighty mighty combination – and there's no finer proof of that fact than this sweet little set! Quincy had a way of swinging Basie's group even more than Neal Hefti did – really letting the piano step out front, and swinging the larger horn ... LP, Vinyl record album