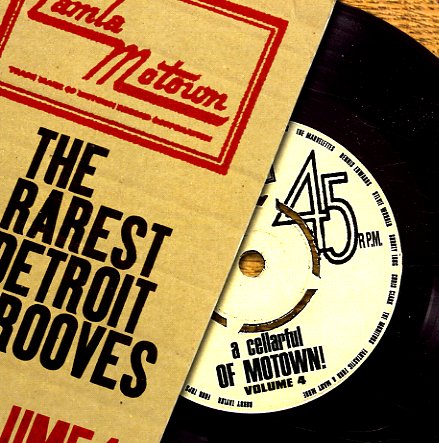 An amazing return to form for this legendary collection – filled with never-heard numbers, pulled from the 60s and 70s vaults of Motown Records! Even if you think you've got plenty of Motown in your collection already, you'll find plenty more here to love – totally fresh tracks by some of the label's biggest artists, plus some other gems by lesser-known stars – all of which have all the punch, power, and sparkle of classic Motown at its best! The 2CD set is brimming over with greatness – and we're honestly stunned that they can still come up with so many unreleased gems, even after three previous volumes in the collection. Titles include "Kidnapped" by The Blackberries, "Keep On Tryin" by The Fantastic Four, "My Baby Moves Me" by Brenda Holloway, "Your Kiss Kiss" by Marvin Gaye & Oma Heard, "Miss Lonely Heart" by The Vandellas, "You Gave Me Love To Live For" by Debbie Dean, "Head Over Heels In Love With You Baby" by The Spinners, "I'd Cry" by Chuck Jackson, "Twin Brother" by Eddie Holland, "Daddy Cool" by Oma Heard, "Three Time Loser" by Marvin Gaye, "The Girl I've Chosen To Be My Bride" by Joe Stubbs, "A Bird In The Hand" by Gladys Knight & The Pips, "Somebody's Waiting For Me" by The Contours, "Only A Lonely Man Would Know" by Ivy Joe Hunter, "The House That Jack Built" by JJ Barnes, "The Philly Dog" by Earl Van Dyke, and "Why Don't You Come Home" by Stevie Wonder.  © 1996-2021, Dusty Groove, Inc.