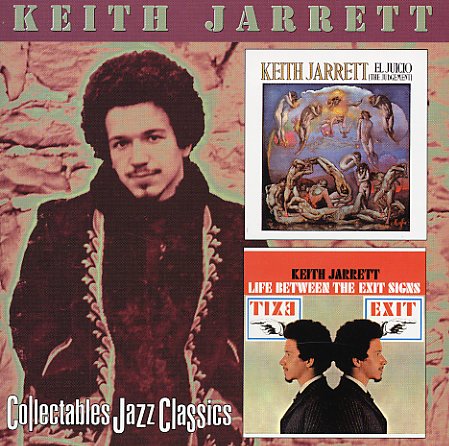 El Juicio (The Judgement)/Life Between The Exit Signs

2 obscure early sessions by Keith Jarrett – back to back on one CD! El Juicio is wild and wonderful work by Keith – light years away from his records on ECM! The album features a quartet that includes Dewey Redman on tenor, Charlie Haden on bass, and Paul Motian on drums – but it's clearly Keith who's driving the bus here, taking lots of odd twists and turns for playful moments that come as an unexpected surprise. One of the best of these is the short percussion track "Pre Judgement Atmosphere", which almost sounds like a Moondog number – and another is the rollingly funky "Gypsy Moth", a tune that always seems to be careening out of control, but is never "outside", just percussively grooving. Side two features two longer jamming tracks that almost have a loft jazz feel – "El Juicio" and "Piece For Ornette" – and Keith plays alone on the track "Pardon My Rags". Life Between The Exit Signs is early trio work by Keith, a bit straighter than some of his 70s recordings – but in a good way, with kind of a New York modern groove that reminds us of early work by Paul Bley or Steve Kuhn! The trio's a very progressive group – with Charlie Haden on bass and Paul Motian on drums, making for a really open-ended approach to the rhythms – and the album includes the original compositions "Church Dreams", "Margot", "Long Time Gone", and "Love No 1 & 2".  © 1996-2023, Dusty Groove, Inc.
(Out of print.)