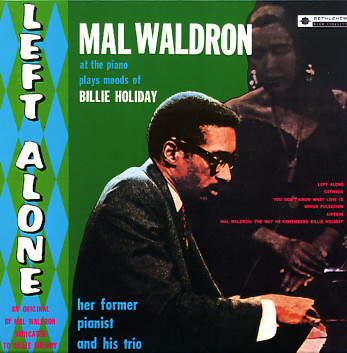 A beautiful album by Mal Waldron – recorded in 1960, after the passing of Billie Holiday, and a very loving tribute by Waldron, who was her accompanist for a number of years. The set moves way past the usual "Holiday songbook" mode, and features instead a dark batch of tracks, two written by Waldron – "Minor Pulsation" and "Cat Walk" – a third written by him and Holiday, the famous tune "Left Alone". Jackie McLean plays some fantastic alto sax on the version of "Left Alone", and the rest of the tracks are trio tracks played by Waldron, Julian Euell, and Al Dreares. The set also features one very strange track – "Mal Waldron: The Way He Remembers Billie Holiday" – which is an interview with Waldron about Billie! And sure, there were many cash-in records after Billie Holiday died, but this is one of the best, and it comes from a very legitimate source!  © 1996-2022, Dusty Groove, Inc.
(Nice Japanese pressing, with obi – Trio PAP 23001.)

Stardust – The Bethlehem Years (aka Motor City Scene)
Bethlehem, 1960. Near Mint-
LP...$14.99
One of the most hard-hitting sessions ever recorded for the Bethlehem label – and a rare date for the imprint by the team of trumpeter Donald Byrd and saxophonist Pepper Adams! The style here is similar to work the pair recorded for Riverside and Blue Note at the same time – razor-sharp ... LP, Vinyl record album