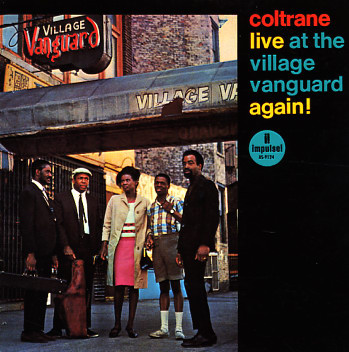 John Coltrane returns to the Village Vanguard – but his sound here is a lot more far-reaching than a few years before! The album's a great counterpart to the first Vanguard session – as it takes all of the bold, soaring energy of that date, and balances it with the newly introspective sound of the later Coltrane years – plus some of the freedoms learned from the Love Supreme era. The group here showcases the new territory explored by Coltrane – with Trane himself on tenor, soprano, and a bit of bass clarinet (echoing earlier Dolphy), plus Pharoah Sanders on additional tenor, Alice Coltrane on piano, Jimmy Garrison on bass, and Rasheid Ali on drums. The album only features 2 long tracks – an incredibly soulful version of "Naima", and a very firey version of "My Favorite Things", but one that begins with a haunting bass solo by Garrison!  © 1996-2022, Dusty Groove, Inc.
(180 gram pressing from the late 90s, in a gatefold cover.)

Coltrane Time (Douglas Collection)
United Artists, 1958. Near Mint-
LP...$24.99
This is a repackaged version of an album that was originally issued under Cecil Taylor's name, under the title Hard Drive (and later Stereo Drive, or something like that). The record brings together two of the late 50's most promising modernists – Cecil Taylor and John Coltrane – in a ... LP, Vinyl record album

Impressions
Impulse, 1963. Near Mint- Gatefold
LP...$39.99
Brilliant work – John Coltrane really opening up in his new spiritual mode of the 60s, hinting at the changes to come, while still keeping the modal groove of previous recordings! The record features tracks from a few different sessions from the years 1961 to 1963, but it holds together ... LP, Vinyl record album

Crescent
Impulse, 1964. Near Mint- Gatefold
LP...$39.99 (CD...$6.99)
Sharp-edged John Coltrane at his best – a record that we'd rank right up there with Love Supreme, and which is a key transition point in Coltrane's musical ideas! There's a very strong edge to Coltrane's tone here – and even on the mellower ballads, he plays with a sound not always ... LP, Vinyl record album