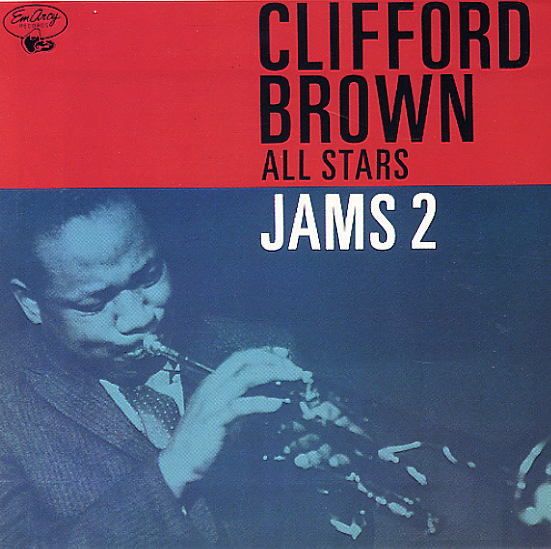 Great rare material from Clifford Brown's legendary days at Emarcy – tracks recorded as part of the Dinah Jams vocal sessions, but done in a much more extended jam session mode! Washington sings a bit on 2 of the tracks, but the main focus here is on Brownie working with a jamming set of instrumentalists that really open up on extended solo work. The album features 2 groups – one with the great Walter Benton on tenor, Herb Geller and Joe Maini on altos, and Kenny Drew on piano – the other with Clark Terry on trumpet, Geller on alto, Harold Land on tenor, and Junior Mance on piano – great lineups on both sessions! Tracks are long, very much in the "jams" feeling of the title – and titles include "Coronado", "I'll Remember April", and "Crazy He Calls Me".  © 1996-2022, Dusty Groove, Inc.
(Out of print.)

More Study In Brown
EmArcy (Germany), 1955. Used
CD...$4.99
A great follow up to the legendary Study In Brown album – featuring work recorded by Clifford Brown in the 50s, but not issued until nearly 30 years later, in this Japanese-collected batch of rare material! As with the original album, the core group on the record features Clifford Brown on ... CD

At Basin Street (with bonus tracks)
EmArcy/Verve, Mid 50s. Used
CD...$7.99
About as classic as you can get for the Brown/Roach group – recorded at Basin Street with a group that includes Richie Powell on piano, Sonny Rollins on tenor, and George Morrow on bass. Tracks are tight and in that firey hardbop mode the pair pioneered – and titles include "Gertru ... CD