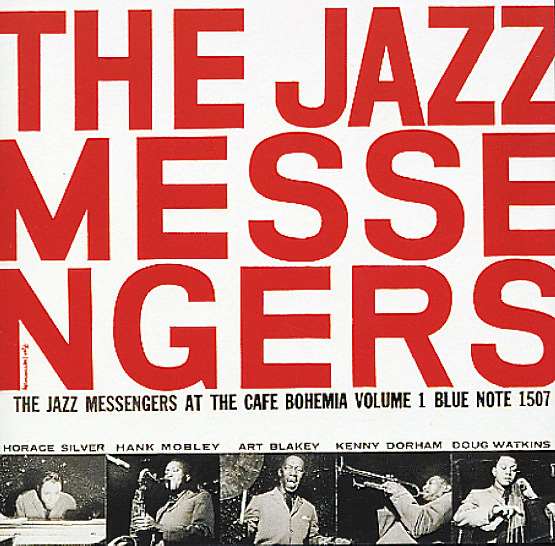 A classic early set featuring the Jazz Messengers back when the group was less of an Art Blakey project, and more of an all-around affair – as you might guess from a lineup that also includes Horace Silver on piano, Kenny Dorham on trumpet, Hank Mobley on tenor, and Doug Watkins on bass! The live set is one of the earliest and purest versions of Blakey's hardbop vision, touched with the slightly exotic lyricism of Silver, which gives the tracks a wonderful edge. The playing is excellent throughout – and the album's the kind of live stormer that shows why the group were such a huge draw right out of the box, and why they performed as well (if not better) in a live setting than they did in a studio one! Tracks include "Minor's Holiday", "The Theme", "Prince Albert", and "Deciphering The Message" – and the CD features 3 bonus tracks, all long, plus great remastering!  © 1996-2023, Dusty Groove, Inc.
(Out of print.)

Face To Face (with bonus tracks)
Blue Note, 1961. Used
CD...$9.99 (LP...$29.99)
One of the all-time great tenor/organ sessions on Blue Note – totally fierce, with a sound that's a lot rawer than most other work on the label! The incredible Baby Face Willette grooves it hard and heavy on Hammond – working in a quartet that includes Fred Jackson on tenor, Grant ... CD

Magic Touch
Blue Note, 1985. Used
CD...$2.99 (LP...$4.99)
A crucial album for the jazz guitar in the 80s – the debut effort of Stanley Jordan, and a set that exploded with a very fresh sound! Jordan has a really unique way of handling his instrument – playing up and down the fret board with both hands – in ways that are often so ... CD

Love Call
Blue Note, 1968. Used
CD...$11.99
A really great late 60s session from Ornette Coleman – one that shows is increasing expansion in sounds and styles, and which also offers a bridge between avant jazz generations too! That bridge comes in the presence of Jimmy Garrison on bass and Elvin Jones on drums – a surprising ... CD