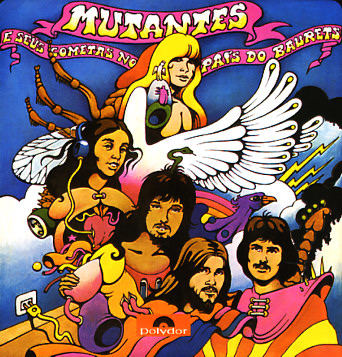 One of the hardest rocking albums ever cut by Os Mutantes – a record that's got a slightly ironic take on rock and roll styles of the time – still performed with the sense of drama and humor that always made the band so great! Rita Lee and Arnaldo Baptista are still in the group at this point, and they're working amidst a heavy wave of guitars that echo out with a bit of keyboards and some rhythms that are chunky enough to almost be called funky at times, but sweet and dreamy at others – all produced with a flanged-out finish that makes the whole thing sound great! Titles include "Balada Do Louco", "Todo Mundo Pastou II", "Cantor De Mambo", "Dune Buggy", "Rua Augusta", and "Posso Perder Minha Mulher, Minha Mae, Desde Que Eu Tenha, O Rock and Roll".  © 1996-2022, Dusty Groove, Inc.
(Out of print and still sealed.)

Mutantes (1969)
Polydor (Brazil), 1969. Used
CD...$11.99
The second set of madness from the legendary Os Mutantes – and like the first, an album done in close collaboration with arranger/producer Rogerio Duprat, whose talents add a new level of genius to the record! The album's got a compelling mix of styles that strikes out on the very first tune ... CD