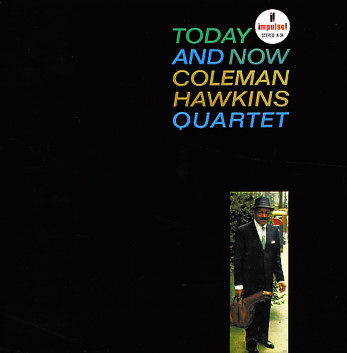 A beautiful record – but that's no surprise, since most of the later work of Coleman Hawkins tends to be great! The setting is quite laidback – and Hawkins' time-weathered tenor is placed in a perfect setting with Tommy Flanagan on piano, Major Holley on bass, and Eddie Locke on drums. The set list is spare, with simple quartet arrangements – but Hawk's solos are mindblowingly perfect, and with a great edge that you won't find in his earlier recordings. It's hard to describe what we're talking about –but the more and more we listen to his later records, the more we realize what a genius he was! Includes the tracks "Don't' Love Me", "Quintessence", "Go Lil Liza", and "Swingin' Scotch".  © 1996-2021, Dusty Groove, Inc.
(Out of print.)

Hawk Flies High (Keepnews collection)
Riverside, 1957. Used
CD...$6.99
A key album in the reintroduction of Coleman Hawkins in the late 50s – recorded in a style that still bears a lot of traces of earlier years, but at a time when Hawk was being claimed as a key influence by a variety of younger modernists! The set's got a sense of freedom that's really ... CD