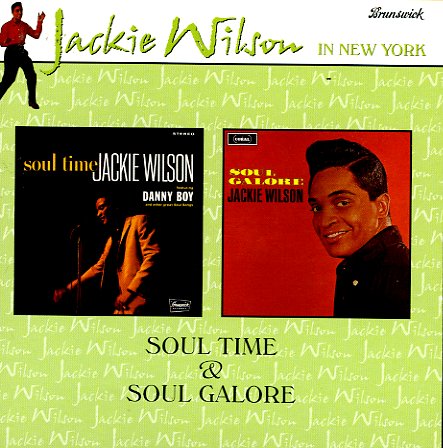 Mid 60s work by Jackie – 2 albums back to back on one CD! The cover of Soul Time carries the subtitle "featuring 'Danny Boy' and other great Soul Songs" – and while it's tough to even imagine "Danny Boy" as a soul song, and not an Irish tenor chestnut, it's also important to remember that Jackie's work in taking the track, as with others of its nature, was a key factor in crossing over soul audiences. Maybe not as important as the work of Motown, sure, but Jackie was almost doing it first – as you'll hear on this album. The set's got arrangements by Horace Ott, Teacho Wiltshire, and Dick Jacobs – and there's some great little soul numbers in the set – including "A Kiss, A Thrill, & Goodbye", "Soul Time", "She'll Be There", "Better Play It Safe", and the uptown chiller "No Pity (In The Naked City)". Soul Galore is much more straightforward soul from Jackie – featuring nice hard-hitters like "Soul Galore", "Brand New Thing (parts 1 & 2)", "Let Me Build", "I Got My Mind Made Up", "So You Say You Wanna Dance (Workout #2)", and "Your Loss My Gain". 24 tracks in all.  © 1996-2022, Dusty Groove, Inc.
(Out of print.)

Lonely Teardrops (with bonus track)
Brunswick/Ultra Vybe (Japan), 1959. Used
CD...$11.99 (CD...$16.99)
Jackie Wilson really takes off here – leading the set with his landmark title track, then moving into a range of tracks that really display his tremendous vocal talents! The setting is a formative one in early soul – not entirely free from pop, but directed by the singer into really ... CD

He's So Fine/Lonely Teardrops
Brunswick/Edsel (UK), 1958/1959. Used
CD...$11.99
Jackie Wilson's first 2 albums – back to back on one CD! He's So Fine is a hard-rocking batch of tunes that captures Jackie at his early best! The tunes here really crossover wonderfully – drawing on Jackie's rich vocal history with The Dominoes and The Drifters – but also ... CD

Sings The World's Greatest Melodies/Spotlight On Jackie Wilson
Brunswick/Edsel (UK), 1963/1965. Used
CD...$19.99
2 unusual albums from Jackie – back to back on one CD. Jackie Wilson Sings The Worlds Greatest Melodies is a strange one – as Jackie expands his horizons to include a range of global pop tunes that include "Alone At Last", "Pianissimo", "My Eager Heart", ... CD

Beautiful Day/Nobody But You
Brunswick/Edsel (UK), 1973/1976. Used
CD...$16.99
2 late Brunswick albums by Jackie Wilson – back to back on one CD! Beautiful Day is killer Chicago soul from Jackie – with stone cold Brunswick production by Carl Davis, and lots of arrangements by Willie Henderson. The title cut "Beautiful Day" is a soaring original tune ... CD

So Much/Jackie Sings The Blues
Brunswick/Edsel (UK), 1959/1960. Used
CD...$16.99
2 early albums by Jackie Wilson – back to back on one CD! Jackie Sings The Blues is one of Jackie's greatest records – and one of his most soulful, too! The album features Jackie doing some great soul versions of bluesy tracks, with backing that's sort of in the style of his other ... CD

You Ain't Heard Nothin' Yet/Merry Christmas
Edsel (UK), 1963. Used
CD...$11.99
2 of Jackie's odder Brunswick albums – back to back on one CD! On You Ain't Heard Nothin Yet – you certainly ain't heard nothin, not until you hear this very strangely conceived set of Jackie doing a tribute to Al Jolson! We could condemn this, but we actually find it pretty ... CD

Definitive Young Holt Unlimited
Brunswick, Late 60s. Used
CD...$9.99
Great work from one of the grooviest combos ever – the funky bass of Eldee Young, soulful drums of Red Holt, and wicked piano and arrangements from some of the leading talents on the Chicago soul scene of the 60s! We'll be honest and say that to us, everything these guys did was great – ... CD

By Special Request/At The Copa
Brunswick/Edsel (UK), 1961/1962. Used
CD...$6.99
2 of Jackie's more unusual albums for Brunswick – both from the early New York years, back to back on one CD. By Special Request features Jackie running through a set of mostly standards – doing them in a jazzier style than usual, but all with the soulful vocals that you'd expect. ... CD