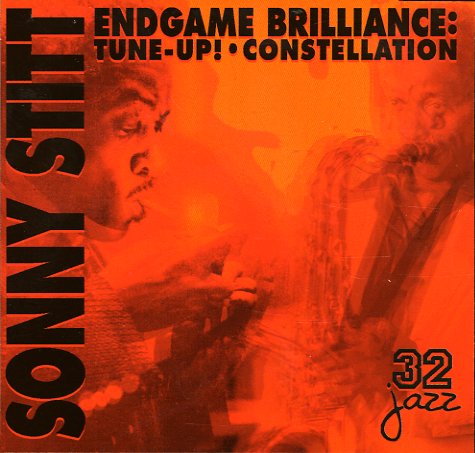 Early 70s magic from Sonny Stitt – two albums recorded in 1972 for the Cobblestone label! First up is Tune Up – a great one from Stitt's post-Prestige years, and a real back-to-basics effort that recalls the genius of his work on Roost! The format is straight and simple – Stitt's tenor and alto fronting a quartet that includes Barry Harris, Sam Jones, and Alan Dawson – all playing in a way that puts Sonny in command on all tracks, blowing with an amazing tone that makes us want to throw away all his funk, organ, and electric outings, and just concentrate on these straight acoustic sides. Stitt has a way of blowing the reed like he's got his whole mouth moving into the sax – an earthy, human, and personal feel that first came out strongly in his work during the late 50s, but which has grown even more by this point – even if you couldn't hear the development on other sets. And given our love of funk and electric sides, we're honestly surprised we find ourselves championing a record like this from the early 70s – but it's a great one, and not to be missed if you remotely dig Stitt! Titles include "Tune Up", "Idaho", "Just Friends", "Groovin High", and "Blues For Prez & Bird". Constellation is all bop and all soul all the way through, and recorded with a tight quartet that features Barry Harris on piano, Sam Jones on bass, and Roy Brooks on drums! The style's a bit like Sonny's work of the late 50s, but there's also a fluidity to the rhythm section that makes it a bit different too – a sound that's warm, open, and soulful – creating a space into which Stitt settles nicely and blows like mad. There's no gimmicks at all, just solid classic jazz skills – and titles include "Casbah", "Constellation", "By Accident", "Webb City", and "Topsy".  © 1996-2022, Dusty Groove, Inc.
(Out of print.)

Saxophones Of Sonny Stitt
Roost (Japan), 1958. Used
CD...$19.99 24.99
Magical Stitt work on Roost – an album of marked understatement, from the simple title, standard cover, and lack of session details on the back – all of which might make you think "oh yeah, heard this one before." But one drop of the needle opens the album up immediately ... CD

Sonny Stitt Plays Arrangements From the Pen Of Quincy Jones (Japanese pressing)
Roost/EMI (Japan), 1955. Used
CD...$9.99
Sonny Stitt plus the early genius of Quincy Jones – a really great combination that makes for a standout session on Roost! As you might guess with Quincy handling the arrangements, the group here is bigger than usual for Stitt – especially given that the bulk of his Roost sessions were ... CD

Just The Way It Was – Live At The Left Bank
Label M, 1971. Used
CD...$6.99
A tasty little live set from Sonny Stitt – recorded in the company of organist Don Patterson! The set cooks with the fire of the best Patterson/Stitt studio sides for Prestige – and features a similar trio lineup that has the pair accompanied only by drummer Billy James – going ... CD

It's Magic
Delmark, 1969. Used
CD...$5.99
A lot like Sonny's work with Hammond on Prestige Records – as the set features a trio with Don Patterson on the Hammond B3 and Billy Pierce on drums! CD

New York Jazz
Verve, 1956. Used
CD...$5.99
Sonny Stitt's work for Verve was some of his best on record – and this album is a perfect illustration of that bold claim! Sonny's blowing here in a wonderful style – a bit more restrained than on his early bop sides, more complicated than on his later soul jazz sessions, and all ... CD