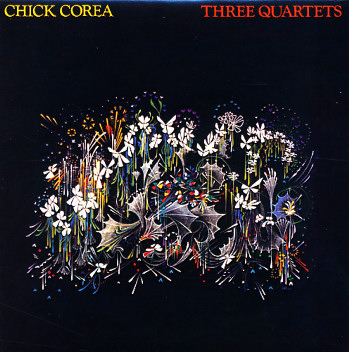 A great straight set from Chick Corea – one that has him playing acoustic piano throughout, and reclaiming some of the bolder jazz territory he first forged in the 60s! The tracks are long and soaring – very soulful in their construction, and played in a dynamic way that's surprisingly without cliche – no easy "hit" jazz moves, and instead a real return to basics for a quartet that includes Chick on piano, Michael Brecker on tenor, Steve Gadd on drums, and Eddie Gomez on bass. Gomez, as usual, really makes the record sound great – giving it a round, warm heart that glows throughout – and titles include "Quartet No 1", "Quartet No 2", and "Quartet No 3".  © 1996-2020, Dusty Groove, Inc.
(Cover has a promo stamp.)

Solo Guitar
Warner, 1989. Near Mint-
LP...$5.99
Beautiful work from the great Earl Klugh, and a set that's exactly what's promised in the title – a solo guitar outing that shows an entirely new side of Earl's many talents! Klugh's acoustic playing on other albums was always great – but here, it really comes to the forefront, with a ... LP, Vinyl record album

Life Stories
Warner, 1986. Very Good+
LP...$4.99
A huge one from the mighty Earl Klugh – and the kind of record that reminded the world that he was still one of the most unique fusion talents around! Earl's got this perfect way of blending acoustic and electric elements with effortless ease – his own soft string solos and warmer ... LP, Vinyl record album