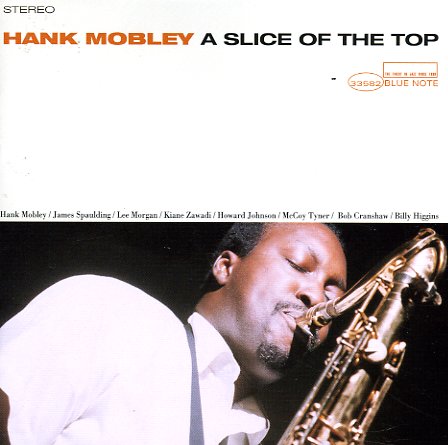 Slice Of The Top (Connoisseur Series)

A lost session by Hank Mobley – originally recorded in 1966, but not officially issued until 1979, and then only briefly until another short issue in the mid 90s! The record has Mobley really reaching out into a new bag – hitting a more soulfully arranged sound than on some of his other straighter Blue Notes – a full, rich groove that's totall wonderful! Duke Pearson arranged the group, and it's slightly larger than usual – with James Spaulding on alto, Lee Morgan on trumpet, McCoy Tyner on piano, Reggie Workman on bass, Billy Higgins on drums, and Kiane Zawadi and Howard Johnson providing a very unique tuba/euphonium bass part – hardly the clunky horns you might expect, and instead sort of a rumbling bottom-end sound that's really great. Titles include "Hank's Other Bag", "Touch Of Blue", and "A Slice Of The Top".  © 1996-2022, Dusty Groove, Inc.
(Out of print original Conoisseur pressing.)

No Room For Squares
Blue Note, 1963. Used
CD...$4.99
An excellent CD reworking of the original Mobley hardbop classic, and one that restores a number of tracks that were originally recorded for the album's session, but which showed up on other Blue Note albums. The whole thing's got 8 cuts in all, some of which didn't appear on the orignal album, ... CD

Flip
Blue Note, 1969. Used
CD...$24.99
Late work by tenor giant Hank Mobley – and a really unique session that stands out from his other Blue Note work of the time! The set was recorded in Paris with an ultra-hip lineup – one that features Dizzy Reece on trumpet and Slide Hampton on trombone – both fresh players ... CD

Straight No Filter (with bonus tracks)
Blue Note, 1966. Used
CD...$11.99
No filters here, as Hank Mobley's sound is clean, lean, and right on the money – hitting that newly-sophisticated groove of the Caddy For Daddy years in this sweet unissued set! The date was recorded in the 60s, but unissued by Blue Note for many years – another one of those head-scratc ... CD

Soul Station (non RVG edition)
Blue Note, 1960. Used
CD...$4.99 (LP...$25.99)
One of the key classics from the hardbop years of Blue Note – the kind of album that really set the label apart from the rest at the time! Soul Station is a deceptively simple album that has tenor giant Hank Mobley playing standards and originals in a quartet with Wynton Kelly on piano, Paul ... CD