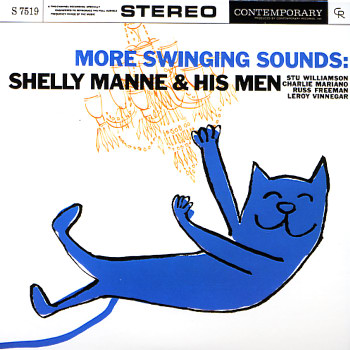 One of the few great records that alto saxophonist Charlie Mariano cut with Shelly Manne – and a heck of a wonderful record that really set a new tone for Shelly's groove at the time! Things here are a bit looser and freer than before – longer tracks with more room for solos to really take flight – yet still a sense of modern arrangement that marked the Manne sound from its inception. The group's a quintet with Stu Williamson on trumpet, Russ Freeman on piano, Leroy Vinnegar on bass, and Mariano on some especially nice alto solos – and the interplay between Charlie and Stu easily rivals the best Bethlehem recordings by the pair at the time. Titles include the excellent 10 minute "Pint Of Blues", an original by Charlie – plus Bill Holman's extended "Quartet", and versions of "The Wind", "Moose The Mooche", and "Tommyhawk".  © 1996-2022, Dusty Groove, Inc.
(Out of print.)

West Coast Jazz In Hi Fi
Hi Fi/OJC, 1959. Used
CD...$9.99
A hard-swinging session that's much hipper than you might guess from the "hi fi" or "west coast" in the title – recorded with none of the cliches that both tags might make you think – and instead a well-crafted set of solos from the mighty Richie Kamuca! Back in the ... CD

Chant
Riverside/OJC, 1961. Used
CD...$28.99
Early genius from Sam Jones – the kind of record that showed the world that he was way more than just a bass player – even though he was pretty darn great at that! At the time of the set, Sam was already raising plenty of ears with his work in the Cannonball Adderley group, an outfit ... CD

My Mama Pinned A Rose On Me
Pablo/OJC, 1977. Used
CD...$8.99
Mary Lou Williams is dipping far back into her roots here – working in a very bluesy batch of styles, with only accompaniment from Buster Williams on bass to back her up! The tracks are all relatively shortish, and done in styles that stretch back to older modes of 20s and 30s jazz piano ... CD

Two For The Blues
Pablo/OJC, 1983. Used
CD...$11.99
A wonderful reunion of the team of Frank Foster and Frank Wess – caught here in an easy-going and laidback style that's miles away from their work with Count Basie! The youthful rhythm section of Kenny Barron, Rufus Reid, and Marvin Smitty Smith really adds a lot to the set – giving ... CD