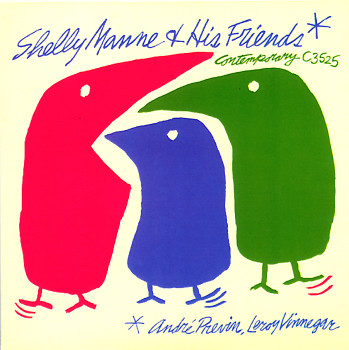 With friends like these, it's easy to sound great – and the record's a trio classic from drummer Shelly Manne, cut with the same associates heard on his famous My Fair Lady album for Contemporary! Piano is by Andre Previn and bass is by Leroy Vinnegar – and as with the other set, Previn's a real surprise here – bursting forth with brightness and presence that are right at home in the setting, and which make us recast our previous conceptions of him as a more cocktail-styled player. The tunes are sometimes longish, which makes for some more inventive interplay between trio members – and titles include "Collard Greens & Black Eyed Peas", "Squatty Roo", "Tangerine", "The Girl Friend", "I Cover The Waterfront", and "Stars Fell On Alabama".  © 1996-2022, Dusty Groove, Inc.
(Out of print.)