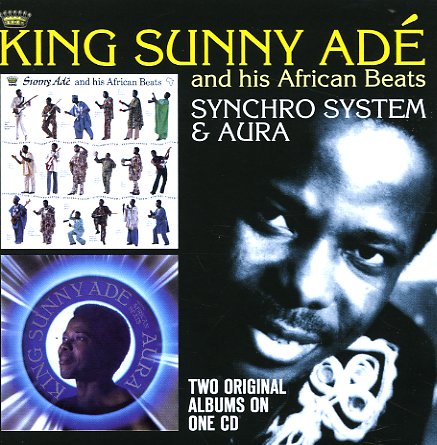 A pair of groundbreaking records from King Sunny Ade – both of which represent a new wave of interest in African music after the initial burst of the Fela Kuti generation! First up is Synchro System – fantastic work from King Sunny Ade – one of his first truly global releases, and an album that marked a whole new sound in his music! Sunny had been issuing lots of his own records back home in Nigeria – but this set has the juju master working in London, with really fantastic production that pushes his sound in really great ways – echoey waves of basslines and percussion, subtle but powerful vocals, and percolating guitar that takes on a whole new sonic sensibility in the setting! There's a richness to the texture that's amazing – almost as if Brian Eno produced – and titles include "Synchro Feelings Ilako", "Mo Ti Mo", "Penkele", "Maajo", "Synchro System", "E Saiye Re", "Tolongo", "E Wele", and "Synchro Reprise". Next up is Aura – a crucial record in the early days of the global scene in the 80s – a set that lifts the music of King Sunny Ade from its roots in Nigeria, and mixes it up with some fresh elements that really open things up for a world's worth of ears! The approach isn't commercial – at least not in the modes of the later world music years – but there's occasional elements that echo the beat culture rising up in New York and London, mixed with the warmer sounds that were always at Sunny's music – especially that way of making the acoustic percussion and basslines come together in flowing waves of completely sublime sound! All tracks are nice and long – and titles include "Gboromiro", "Oremi", "Ire", "Iro", "Ogunja", and "Ase".  © 1996-2022, Dusty Groove, Inc.