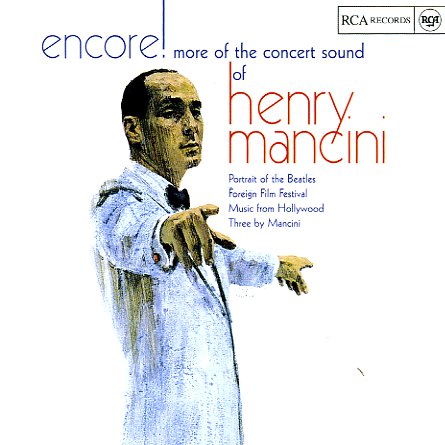 Encore – More Of The Concert Sound Of Henry Mancini

An unusual concert performance from Henry Mancini – one that features the maestro leading a full orchestra, but with a really groovy feel overall! Each track is relatively long, and based around a set of smaller songs wrapped up in a medley – almost mini-symphonies in pop music, arranged by Mancini with a really lively sound that goes far past the usual pop orchestral styles of the time. Soloists include Mancini on piano, Ted Nash on alto sax, Arthur Gleghorn on flute, and Bud Brisbois on trumpet – and the set features "Portrait Of The Beatles", made up of Beatles' hits; "Foreign Film Festival", made up from 60s film themes; "Music From Hollywood", with US film themes; and "Three By Mancini", a variation on some groovy originals by Hank!  © 1996-2022, Dusty Groove, Inc.
(Stereo pressing with deep groove. Cover has light wear and a center split in the spine.)