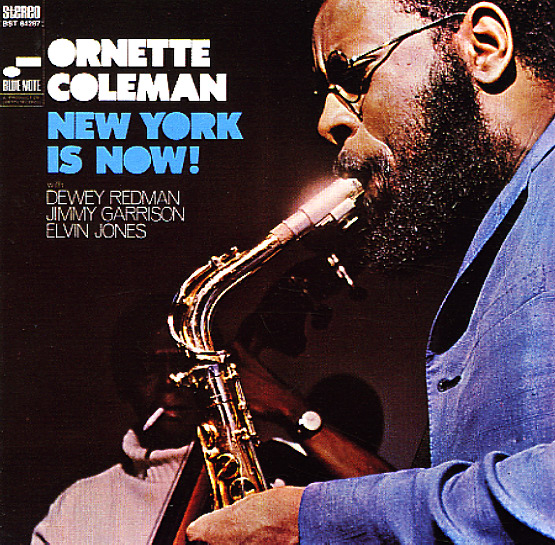 "New York is now" – a pretty bold statement from saxophonist Ornette Coleman, but one that definitely shows his shift in role – from a major force on the LA underground of the early 60s, to an artist who was helping pave the way for a huge wave of growth on the New York downtown scene in years to come! Ornette's at his most late 60s unbridled here – freer than before, and working with a lineup that includes Jimmy Garrison on bass and Elvin Jones on drums – still no piano at all – plus great work from Dewey Redman on tenor, who really burst into new prominence with this album. Ornette plays a bit of violin alongside alto sax – and tracks include "Toy Dance", "Round Trip", "Broad Way Blues", and "We Now Interrupt For A Commercial".  © 1996-2022, Dusty Groove, Inc.
(1990 US pressing.)

Genius Of Modern Music Vol 1 (Non-RVG remastered edition)
Blue Note, Early 50s. Used
CD...$1.99
A great collection of Monk's 10" recordings for Blue Note – seminal not only for the label's commitment to a modernist bop ideal, but also for Monk's integration in the growing collection of top-level jazz players on the New York scene. The work's notable also for the fact that Monk's ... CD

Blue Note Live At The Roxy 2
Blue Note (Japan), 1976. Used
CD...$9.99
An overlooked gem from Blue Note – a special live performance that brings together some of the label's funkiest and most soulful artists of the 70s! The set's somewhat unusual for Blue Note at the time – especially given the label's increasingly studio-driven approach to jazz, with ... CD