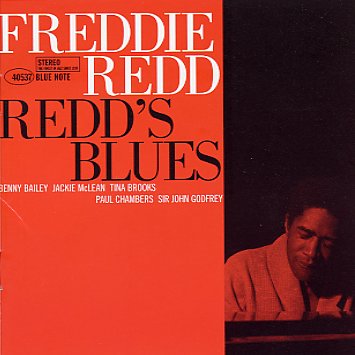 A real corker from Freddie Redd – and never issued at the time! Despite the fact that Freddie was part of one of the greatest sessions ever on Blue Note – the soundtrack to The Connection, done with Jackie McLean – he rarely got the chance to record more for the label, which is what makes this session an especially great treat! The set features Freddie working with an ultra-hip lineup that includes trumpeter Benny Bailey, tenorist Tina Brooks, and the great Jackie McLean, who always seemed to bring out an edge in Freddie's playing that didn't show up otherwise. The style of the tunes is hardbop, in general, but they've got these sharp little edges and modern twists that really make them sound fresh. Perhaps that's why Blue Note didn't issue the session at the time – we'll never know for sure – but it's also what makes the album so enjoyable now! Titles include "Now", "Cute Doot", "Somewhere", "Love Lost", and "Old Spice".  © 1996-2020, Dusty Groove, Inc.
(Out of print Connoisseur CD Series pressing.)