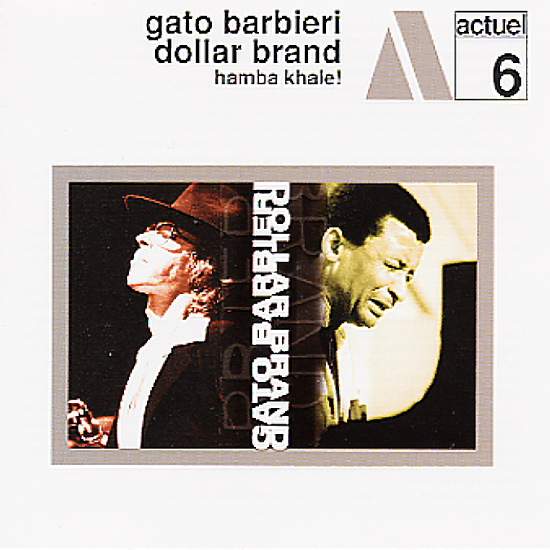 Two jazz giants of the 70s come together on this rare Italian recording from the late 60s – South African pianist Dollar Brand (Abdulla Ibrahim) and Argentine tenorist Gato Barbieri – both working here in spare duo formation, with edges that are a fair bit sharper than most of their later work! The format is incredibly spare – just tenor and piano, plus some occasional cello work by Brand – dark and angular, but also filled with small flowers of hope, flowering in the spontaneous presence of these two great minds – a tremendous spirit that makes the record very different than freer jazz outings, and which maybe points the way towards some of the classic European tenor/piano recordings to come. Tracks are long, with a free flowing quality that's infused with soul and spirit – and titles include "Hamba Khale", "The Aloe & The Wildrose", and "To Elsa".  © 1996-2022, Dusty Groove, Inc.
(Out of print.)

Live In Antibes Vol 1 & 2
BYG/Fuel 2000, Late 60s. Used 2 CDs
CD...$9.99
A seminal live set from tenorist Archie Shepp – and some of his freest, least-structured material ever! Shepp's still a righteous force here on his horn, but there also seems to be equal emphasis on the contributions of all members of the group – woven together in a really rich ... CD

Sem Poupar Coracao
Som Livre (Brazil), 2009. Used
CD...$24.99
Nana Caymmi's still sounding great after all these years – and this recent album has all the grace, charm, and subtle emotion of her best sets from many years back! Nana's always been one of the mellower members of the Caymmi family – and this set has her sounding beautiful on some ... CD

Estrada De Terra – Dirt Road
Adventure Music, 2006. Used
CD...$4.99
A tremendous little record from Philippe Baden Powell – son of the great Brazilian guitarist, and a musician who's set to impress us as much as his father! Philippe's working here in a mode that's no copycat of his famous father at all – on piano, first of all, and with a style that's ... CD