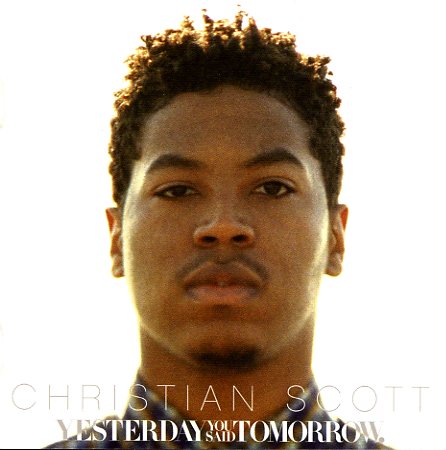 Trumpet player Christian Scott really steps into his own realm of excellence on Yesterday You Said Tomorrow – his best work yet for Concord – a nice mix of moods ranging from sweeter melodic modernism with a rawish, but tight underbelly to heavier, more searing sounds! Here Scott is masterfully blending influences of the 60s heroes with a profoundly modern sensibility, and the players are near perfectly suited to Scott's approach. The material is largely from Scott's pen, but they take on Thom Yorke of Radiohead's "The Eraser" early on in the set, a tune adapted to hypnotic modern jazz sound wonderfully. Players include Matthew Stevens on guitar, Milton Fletcher on piano, Kris Funn on bass and Jamire Williams on drums. Includes the Scott compositions "KKPD", "Isadora", "Angola, LA & The 13th Amendment", "The Last Broken Heart (Prop 8)", "American't" and "An Upending Repentance", Stevens's "After All" and more.  © 1996-2022, Dusty Groove, Inc.
(Booklet appears to be signed by the artist, punch through barcode.)

Heat Wave
Concord, 1982. Used
CD...$7.99
In our opinion, Carmen always sounds best when she's singing with a small jazz combo backing her up – which is why we dig this tasty set from the early 80s, recorded with a great group led by Cal! The album's got some nice Latin touches – thanks to piano by Mark Levin, and conga work ... CD