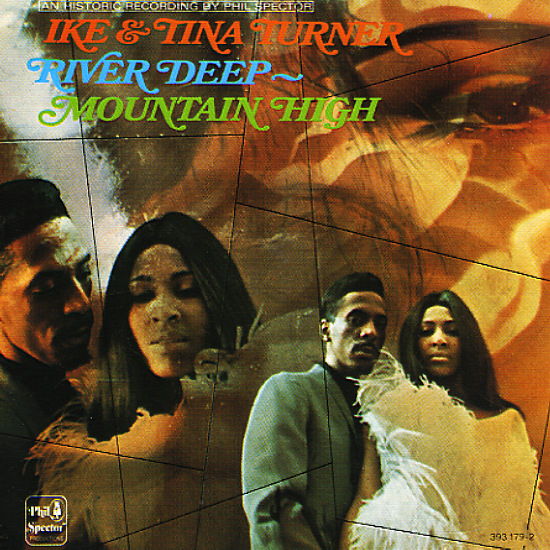 Also available
Ike & Tina Turner — River Deep – Mountain High (180 gram pressing) ... LP 27.99
Ike & Tina Turner — River Deep – Mountain High (180 gram pressing) ... LP 22.99
A legendary pairing of two key 60s pop talents – the soulful sounds of Ike & Tina Turner, and the soaring production styles of Phil Spector! The album's quite different than some of the grittier Turner projects of the time – lots of full orchestrations and strings, mixed with the rougher rhythms you'd usually hear from Ike – a blend that's surprisingly great, and helps push Tina's vocals into wonderfully mature territory – a bit like the mix of deep soul and class that you'd get from Etta James on mid-60s Chess Records! The album's a feather in the cap of both Spector and Turner – and titles include "River Deep Mountain High", "I Idolize You", "A Love Like Yours", "Such A Fool For You", "I'll Never Need More Than This", "A Fool In Love", and "Hold On Baby". Weird cover, too – with photography by Dennis Hopper!  © 1996-2023, Dusty Groove, Inc.
(West German pressing.)

Festival Of Live Performances
Rock Beat, Early/Mid 60s. Used
CD...$5.99 7.99
A smoking festival of live performances from the team of Ike & Tina Turner – recorded here at the height of their mid 60s powers! Forget any classy touches you might expect from the "festival" in the title – because tracks are all plenty gritty throughout – with a ... CD

Come Together/Nuff Said
Liberty/BGO (UK), 1970/1971. Used
CD...$11.99
A pair of Ike & Tina Turner classics – back to back on one CD! First up is Come Together – a key crossover set for the soul duo! Ike and Tina Turner crossed over big by this point in their career – grabbing a lot of ears that were mostly listening to rock music, but who ... CD

Workin' Together/Let Me Touch Your Mind
Liberty/BGO (UK), 1971/1972. Used
CD...$14.99
A pair of late Ike & Tina albums in a single package! Workin' Together is a pivotal album – one that has them still retaining some of the earthiness of earlier years, yet also honing their groove for the crossover audience that was digging them big at the end of the 60s! The best ... CD