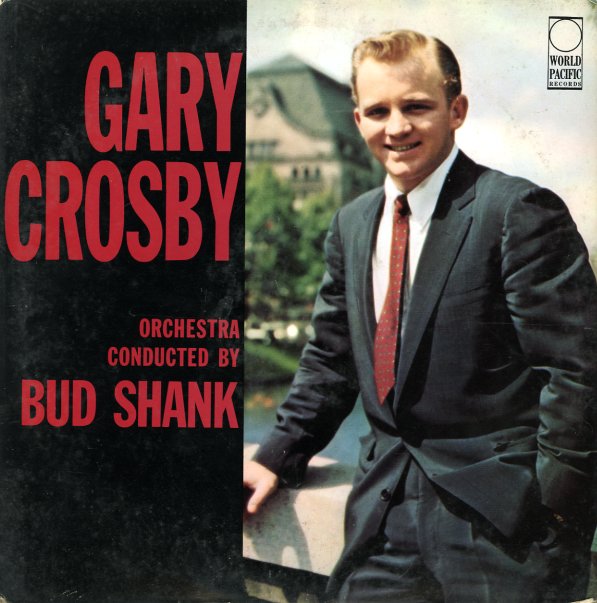 A strange little record, but one with more of a jazz component than you might think! Gary's the son of Bing, natch – and he's following here in his pop's footsteps, singing jazz standards with backing conducted by Bud Shank. The interesting thing is that the session was actually recorded in Germany – and the group features some hip Europeans, like Roland Kovac on piano, Atilla Zoller on guitar, Jerry Van Rooyen on trumpet, and Hans Koller on tenor. Shank plays as well – and titles include "Blue Prelude", "Exactly Like You", "Please Send Me Someone To Love", "One For My Baby", and "Love Is Just Around The Corner".  © 1996-2022, Dusty Groove, Inc.
(Blue label pressing with silver text and deep groove. Cover has light wear and a bit of seam splitting.)

Intimate Kitty White (aka Moment Of Love)
World Pacific, 1955. Very Good+
LP...$7.99
Some of the earliest work we've ever seen from Kitty White – and some of the most haunting as well! The album has tracks with Kitty singing only with accompaniment on harp – played by Corky Hale with a really dark, moody sort of sound – one that works perfectly with the bluer ... LP, Vinyl record album

Carnival
World Pacific, 1969. Very Good+
LP...$6.99
Like Sergio Mendes and Brasil 66? Then you'll love The Carnival! The group was formed by three former members of Sergio's group, working in 1969 with stellar LA pop production from the mighty Bones Howe – all grooving in a style that's got all the best traces of the Brasil 66 sound! The ... LP, Vinyl record album

Five Feet Of Soul
Colpix, 1963. Near Mint-
LP...$5.99
One of Jimmy Rushing's last truly great albums – a jazz-tinged session of bluesy material, one that gets at his best work of the 50s! The arrangements are by Al Cohn, and have a fluid swing that pushes Jimmy past cliche – working with players that include Zoot Sims, Budd Johnson, ... LP, Vinyl record album

Nina Simone At Carnegie Hall
Colpix, 1963. Sealed
LP...$48.99
A hip set of live tracks from Nina Simone – very dark and moody, with backing by only a small combo that includes two guitars, bass, and drums by Montego Joe! Nina handles all the arrangements herself – with a quality that really shows her stepping forward from straight jazz, and ... LP, Vinyl record album

Sarah Vaughan In Hi Fi
Columbia, 1955. Very Good
LP...$13.99
One of Sarah's few albums for Columbia – and quite possibly the best, thanks to some great small group backing, heard on 8 of the album's 12 tunes! The group's a really great one – with Miles Davis on trumpet, Benny Green on trombone, Buddy Johnson on tenor, Tony Scott on clarinet, ... LP, Vinyl record album

Whatever We Imagine
Sea Breeze, 1986. Near Mint-
LP...$49.99
A rare set from Chicago jazz vocalist Janice Borla – cut for the tiny Sea Breeze Jazz label! Janice has a warm approach that picks up on all the best breezy jazz styles of the 70s – working here in a mellow small combo mode that includes vibes, guitar, and light percussion. The tracks ... LP, Vinyl record album

Take The A Train (2nd cover)
Bethlehem, 1956. Near Mint-
LP...$4.99
One of the few small group sessions from vocalist Betty Roche – a singer who was known for her work with Duke Ellington, but who sounds even better in this setting! Betty's got a style that's warmly raspy – a bit more edge than some of the cooler vocalists on the Bethlehem label at the ... LP, Vinyl record album