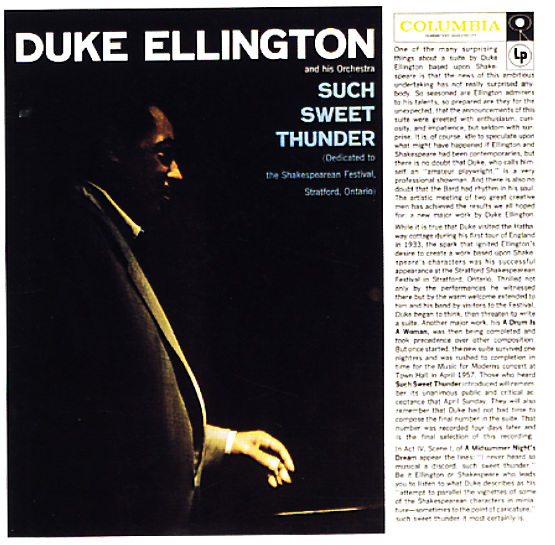 Such Sweet Thunder (plus bonus tracks)

Excellent Duke Ellington work from the late 50s – written and recorded during a period in which he was reemerging with a stronger jazz vision than ever before! The set was written by Ellington and Strayhorn – and dedicated to the Shakespeare Festival in Stratford, Ontario – but forget the Bard-inspired roots of the tracks, because the shimmering moods of the pieces is pure Ellington – with a richness of feeling that's totally great, and a sound that's wonderfully fresh, given that most of these numbers aren't overplayed Ellington compositions! Players include Cat Anderson and Clark Terry on trumpets, Paul Gonsalves on tenor, and Johnny Hodges on alto – and titles include "The Telecasters", "Circle Of Fourths", "Sonnet For Caesar", "Sonnet To Hank Cinq", and "Such Sweet Thunder". CD also features 3 previously unissued tracks, and a bunch of alternate takes and outtakes – for a total of 22 cuts in all!  © 1996-2022, Dusty Groove, Inc.
(Out of print.)

Ellington At Newport 1956 – Complete
Columbia, 1956. Used 2 CDs
CD...$4.99
One of the first albums to ever issue recordings made at the Newport Jazz Festival – quite a big hit, and the beginning of a real trend in jazz! The set's also some great work by Duke – free to perform in a setting that's not bound by some of the time restrictions of earlier years, ... CD

And His Mother Called Him Bill (Bluebird pressing)
RCA/Bluebird, 1968. Used
CD...$4.99
A nicely understated session that was recorded in honor of Billy Strayhorn – who'd passed away a few months before the recording. The set features all classic Strayhorn compositions – played in new versions by Duke and a group that includes Clark Terry, Johnny Hodges, Paul Gonsalves, ... CD