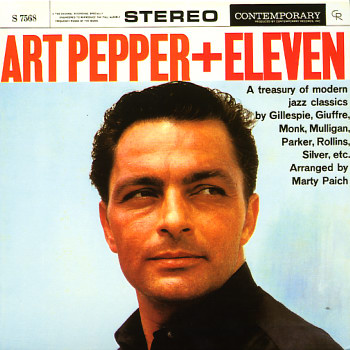 A unique large group session from Art Pepper – one of his few this way as a leader, despite constant 50s presence as a sideman in big ensembles! Arrangements are by Marty Paich, who more than makes things swing – and there's a nice rhythm section dancing underneath a larger group – with Russ Freeman on piano, Joe Mondragon on bass and Mel Lewis on drums. Players in the fuller lineup include Jack Sheldon on trumpet, Herb Geller on alto, Bill Perkins on tenor, and Bob Enevoldsen on trombone and tenor – and titles are mostly modern numbers written by other jazzmen like Horace Silver, Denzil Best, Jimmy Giuffre, and Sonny Rollins. Titles include "Groovin High", "Move", "Four Brothers", "Anthropology", and "Airegin". CD features 3 bonus tracks!  © 1996-2022, Dusty Groove, Inc.

Trip
Contemporary/OJC, 1976. Used
CD...$9.99
The "trip" here is a mellow one – not the soaring, spacey style you might expect in a long line of drug-reference titles for Art Pepper albums – but that difference is a-ok with us, because Art's really hitting some great new territory here, thanks to a hip trio that includes ... CD