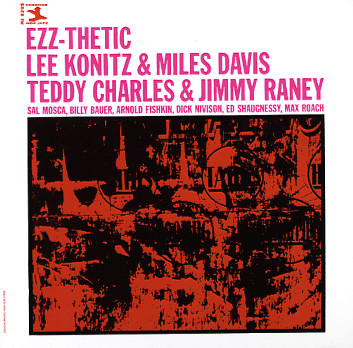 A great full length album that brings together early 50s work in the "birth of the cool" mode! Side one features Lee Konitz and Miles Davis – in a group with Sal Mosca, Max Roach, and Billy Bauer, on very "birth of the cool" like tracks that include "Odjenar", "Hi Beck", "Yesterdays", and "Ezz Thetic". Side two features Teddy Charles and Jimmy Raney co-leading a group with bass and drums – grooving in a cool spare vibes/guitar mode on tracks that include "Edging Out", "Nocturne", "Night In Tunisia", and "Composition For Four Pieces". Also includes 2 tracks that are just duets between Konitz on alto and Bauer on guitar – "Indian Summer" and "Duet For Sax & Guitar" – and these are some of the coolest on the record!  © 1996-2021, Dusty Groove, Inc.
(Mono purple label New Jazz pressing with small RVG stamp. Cover has light wear and aging.)