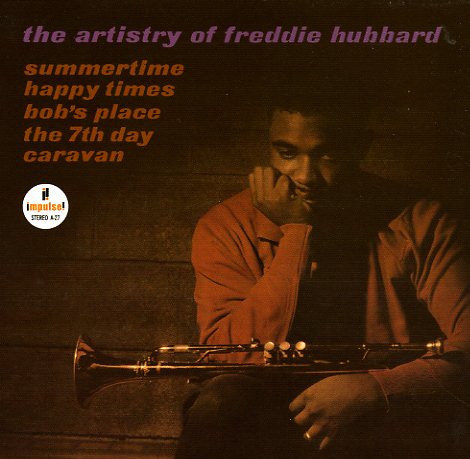 A beautiful album that we'd rank as one of Freddie Hubbard's greatest recordings ever – a truly sublime set that's quite different than his Blue Note work of the 60s, and which really shows him emerging as a major talent on the trumpet! The set features a core sextet of key players – the legendary John Gilmore on tenor sax, making a rare appearance here away from the Sun Ra Arkestra – plus Curtis Fuller on trombone, Tommy Flanagan on piano, Art Davis on bass, and Louis Hayes on drums – the last three of whom provide a soulful, almost spiritual rhythm to the record – elevating Freddie's horn to tremendous heights, possibly for the first time in his career. All tracks are nice and long – and titles include the Hubbard originals "Bob's Place", "Happy Times", and "The 7th Day", all of which roll along on a groove that's not what you'd expect – plus versions of "Summertime" and "Caravan".  © 1996-2022, Dusty Groove, Inc.
(Digipack has some edgewear.)

Red Clay (remastered edition – with bonus track)
CTI, 1970. Used
CD...$8.99
Amazing work from Freddie Hubbard – one of his best albums ever! The title cut's a classic, but all cuts on the album are great – and really set a whole new standard for soul jazz in the 70s! Unlike the freer runs of Miles Davis, Freddie takes things into territory here that's open, ... CD

Breaking Point!
Blue Note, 1966. Used
CD...$9.99 (LP...$36.99)
Pivotal work from trumpeter Freddie Hubbard – a tight, edgy quintet performance that's done with a modern jazz sound that approaches the Blue Note "new thing" sound, but which stays just this side of the fence to keep in line with Freddie's other soulful work of the 60s – yet ... CD

Goin' Up
Blue Note, 1961. Used
CD...$18.99
A real burner from Freddie Hubbard's early years at Blue Note – filled with rich hues, colors, and tones! The group's a quintet – supported by lyrical rhythms from the trio of McCoy Tyner on piano, Paul Chambers on bass, and Philly Joe Jones on drums – working alongside Freddie's ... CD

Sky Dive
CTI, 1972. Used
CD...$11.99
A killer set from Freddie Hubbard's legendary years on CTI! Like the classic Red Clay album, there's 4 tunes here, all longer cuts – where everyone gets a chance to stretch out a bit, over smooth (but not too smooth!) electric grooves, supported by great orchestrations from Don Sebesky! Ron ... CD