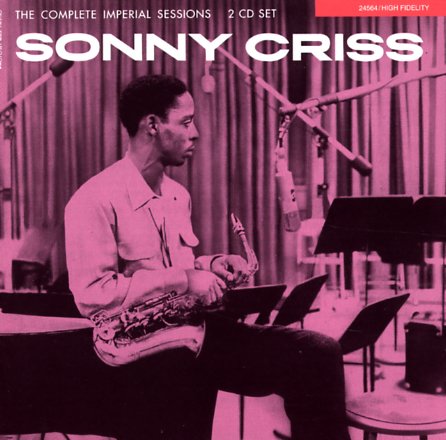 Fantastic work from one of the most overlooked alto talents of all-time! This beautiful CD features tracks from Sonny's 3 rare albums on Imperial – Jazz USA, Go Man, and Plays Cole Porter. The records were all recorded in 1956 – and they feature some of the strongest bop playing to ever come out of LA, total proof that that city wasn't always noodling around with cool jazz during the 50s! Sonny plays alto so well you want to cry – and every note is perfectly placed, with just the right mix of technical skill and warm soulful humanity. Most of this material has only ever been reissued in Japan – and the CD includes wealth of excellent cuts like "If I Had You", "I Love You", "Wailin With Joe", "West Coast Blues", "Criss Cross", "Ham's Blues", and "Blue Friday" – but the whole thing's great!  © 1996-2022, Dusty Groove, Inc.
(Out of print. Blue Note Connoisseur Series pressing.)

Rockin' In Rhythm
OJC, 1969. Used
CD...$14.99
One of the best Sonny Criss albums ever – one of our favorites from his late 60s run at Prestige – and that's really saying a lot! The set's a warmly lyrical session that really has Criss opening up, changing up his groove to display the deep growth he'd experienced as a musician in ... CD