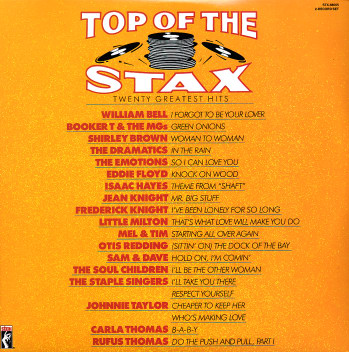 A set that's overflowing with greatness from the legendary Stax Records – a set that features both early material later owned by Atlantic, as well as later hits from the Fantasy empire – making for a package that truly runs the scope of the legendary label, and which features 20 of their biggest hits. Titles include Sam & Dave "Hold On, I'm Coming", The Staple Singers "Respect Yourself" and "I'll Take You There", Carla Thomas "B-A-B-Y", Shirley Brown "Woman To Woman", The Soul Children "I'll Be The Other Woman", Eddie Floyd "Knock On Wood", Johnnie Taylor "Cheaper To Keep Her" and "Who's Making Love", Little Milton "That's What Love Will Make You Do", William Bell "I Forgot To Be Your Lover", Jean Knight "Mr Big Stuff", Booker T & The MGs "Green onions", Rufus Thomas "(Do The) Push & Pull", Mel & Tim "Starting All Over Again", the Dramatics "In The Rain", the Emotions "So I Can Love You", Otis Redding "(Sittin' On) The Dock Of The Bay", Frederick Knight "I've Been Lonely" and Isaac Hayes "Theme From Shaft".  © 1996-2021, Dusty Groove, Inc.
(Traycard artwork has some penmarks & a crease.)

Soul Children/Best Of Two Worlds
Stax, 1968/1970. Used
CD...$11.99
Two beautiful albums by one of the greatest soul groups of all time! The Soul Children were a wonderful Memphis vocal group – with a two parts female/two parts male vocal style that just sounded incredible. All the members of the group were great singers, and the overall sound was a mixture ... CD