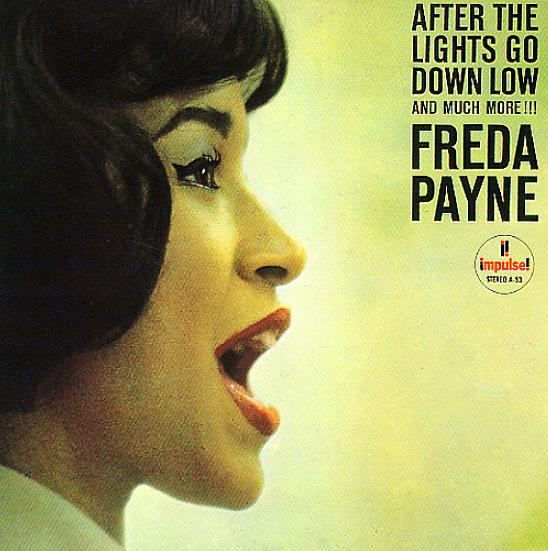 After The Lights Go Down Low

An early gem from singer Freda Payne – recorded back in the days when she was a jazz vocalist, years before her famous hits as a soul artist in the early 70s! The album's a darkly-tinged session with arrangements by Manny Albam – done in the late nite mode that you'd expect from the title, and featuring the kind of sad songs that you'd hear on an album from the time by Lorez Alexandria. The highlight of the album is a great vocal reading of Ornette Coleman's "Lonely Woman" – and other tracks include "Out Of This World", "Sweet September", "Blue Piano", and "After The Lights Go Down Low".  © 1996-2022, Dusty Groove, Inc.
(Rainbow label pressing, with RVG stamp. Cover has two small cutout holes, but is otherwise great.)

Alexandria The Great
Impulse, 1964. Very Good+ Gatefold
LP...$18.99
A beautiful album from Lorez Alexanderia – one of her two excellent sessions for Impulse! The record was cut after Lorez recorded some great sides for the Argo label – and it works off the strength of those sides, taking her unique vocal approach, forged in R&B, but smoothed by ... LP, Vinyl record album

Sing A Song Of Basie (Impulse pressing)
Impulse, Late 50s. Very Good+
LP...$1.99 4.99 (CD...$4.99)
One of the first albums ever by this legendary jazz vocal group! LHR do the incredible – and create a set of vocal renditions of standards by the Basie band, putting jazzy lyrics in to replace the instrumental solos, but keeping the same vibe as the original tracks. The sound and approach ... LP, Vinyl record album